Country living, for those at all interested in Nature Red in Tooth and Claw, provides evidence of same.  We first found the obvious big bones: cow bones, from when this was a pasture, piled in the back corner of the place.  Forensic evidence: more than one bovine, probably died elsewhere and the carcass dragged to this more remote spot for scavengers to take care of.   Next came a deer shoulderblade with shreds of ligament and one leg bone nearby.  Wounded, maybe, or small enough for a coyote to take.    Gradually we found (and in come cases brought home) the skulls of gray fox, raccoon, feral cat...the shell of a turtle, and saw many bones we didn't bring back.  We found fur, feathers, the scattered remains of small animals clearly taken by a predator,  and once a cluster of vultures chowing down on a dead raccoon.  Wary city dwellers, alert to the possibility of anthrax or tularemia from handling dead animals or even old bones.  As part of our wildlife management duties, we kept some track of mortality (feline distemper got a lot of raccoons one year, as well as the gray fox family) and in some cases found a probable human cause (bloodstains in one raccoon's teeth indicating clotting problems, and quite possibly the result of one of the rat poisons.) 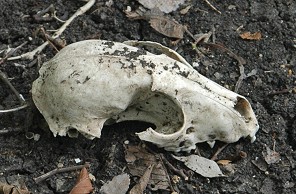 Not the skull with the stained teeth--most teeth here are gone.  Found in creek woods in 2006.
However, we had not found the remains of domestic livestock other than the old cow bones.  Until this week.