Years ago, when we lived in a different place with a reliable water supply, we grew a garden that included beans to dry for later.   Because we were trying things out, initially, we grew a small amount of several varieties, and that meant--once they were dry and in jars--that we didn't have enough of any one of them to make a big pot of bean soup.  So I combined them.  And the soup was better, with the mix of flavors.  Since then, whether we had a garden or not, I've always had a big jar (BIG old pickle jar) of mixed beans.  Anything we can grow and dry goes into it, plus a pound package each of whatever dried beans we find in the grocery store, aiming for variety.  (Scarlet runner beans add a lovely flavor but you don't find them dried in stores--you have to grow them.  And unlike some other beans, they really want a lot of water--which, lately, we haven't had.)   But at least, black-eyed peas, red kidney beans, black beans, pinto beans, and white beans. The big jar depletes through the year, sometimes faster and sometimes slower, and when it's empty, I fill it again with another mix of beans.
( Collapse ) 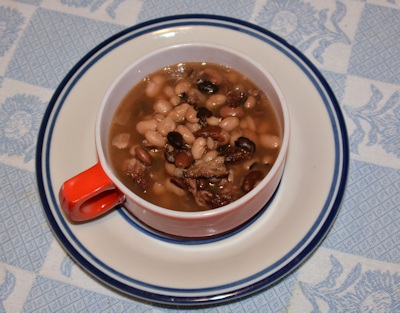