Some yarns do not photograph in true color, and warping the colors makes everything else look weird.   Here's an example: 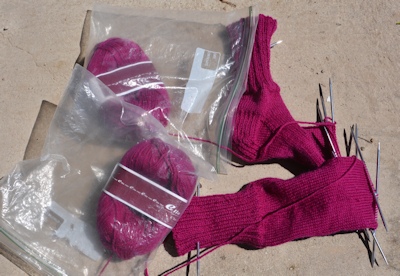 Photographed in direct sunlight on concrete, no color adjustment
( Collapse )

In another couple of days I'll be 70.   I've been married since I was 24-and-some-months.  Before you try to do the math, the last anniversary was the 45th.  So on the topic of marriage, I have more experience than average.   Do try this at home, if you think you have what it takes...

And that leads me to comment on some of the idiocy that's been spouted about marriage over the past half of my married life when it comes to the possibility and then the reality, of recognizing same-sex unions as, yanno, marriages.  Real actual marriages that give same-sex couples or partners or whatever they've been called the same legal status as different-sex marriages.  Because the idiocy being spouted has made me madder and madder over the years, since it consists of a combination of fear, ignorance, selfishness, and downright meanness.
( Collapse )