Sometimes a book stalls because the writer's done something that derailed it, or didn't do something to keep it going.  I experience stall-effect in the middle of almost every book, so now I expect it (hope it won't appear, but am not panicky when it does.)  Doesn't mean I've lost my talent, can't write again, have utterly failed, etc, etc.  It's a part of the way my brain interacts with Story-space, and it means some serious work (not wishful thinking) to figure out what I did or did not do *this* time.

Well, this time what I did was go blasting ahead where I knew things were going, trailing a cloud of necessary secondary characters for whom I'd produced some minimal background.  They were holding me back, when I started the book, so I wrote ahead of my understanding of them.  I start books in a rush--need to get into them quickly, well in, before coming up for air and thought.   And then came to the point where all these secondary characters  basically sat there, a row of plastic dolls, for me to move around in Story-space.  Only that's not acceptable.  Secondaries are not puppets; they need to be seen and felt to be acting out of their own reasonable motivations.  "Why won't you DO things?" I asked.  Little glass eyes stared back.
( Collapse )

The "Summer Beach" pair of striped shorty socks have had some problems here and there, but overall I'm happy with them.   They're to the same basic pattern as my other short socks, but this time combine two yarns leftover from regular socks and two yarns purchased for striping.  They're shown very incomplete in an April 1 post (Socks, Incomplete)  and here they are off the needles and on my feet.  Not yet complete, since a lot of the stripe yarn ends are still not woven in, but I couldn't resist showing them. 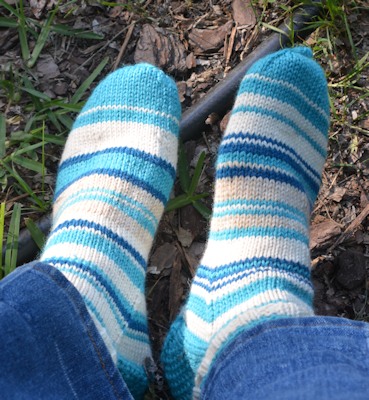 I like the effect of the "sand" colored yarn, Cascade 220 color #9600, in the middle of the foot.  I'm still not sure of the color number for the cream/white yarn, but it's also Cascade 220.  The turquoise and the dark teal are both leftover yarn from the "big" socks.   I have very little of the teal left.  And now to weave in all those shaggy yarn ends.   The next pair to be finished are the Ruby River socks.