There's another name for this now, but when I was growing up, my mother could make useful things (and did) out of all sorts of stuff.  Nothing was thrown away (it might be given away) as long as it had any use in it.  She made end tables out of apple boxes, painted them so they were bright an attractive.  She had other furniture, but mostly she combined materials she could get cheaply and made them into what she needed, and most had more than one purpose.   When we moved from Austin to San Antonio, into a small house (not the 'tiny house' being touted today, but 750 square feet) it did not have much storage (understatement) and she came up from south Texas with a lot of wood and masonite already cut to size; the masonite became sliding panels on the tiny screened entrance fo the kitchen, and the plywood became four 18" cubes with lids, in which I stored (in heavy plastic tubs) flour for baking bread.  That was in...1973 or early '74.   The cubes have been used for other storage, too, like yarn, magazines, toys.

But the years have not been kind to the faux woodgrain finish we put on them, and I wanted to use them again, so I bought paint Thursday and R- painted them that afternoon.  Here they are in the process of going from brown "wood" to solid dark green: 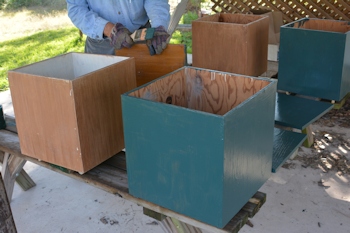 And here they are set up where they will be, in the living room that last year got new carpet and new furniture.  Pretty spiffy.  One at each end of the large couch, two in the space between.   We played a game of Chinese checkers to celebrate. 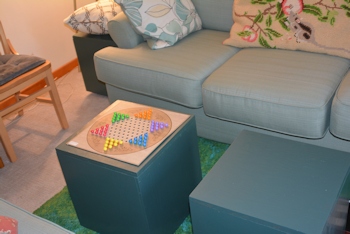 it's a narrow space between the loveseat and couch; the geometry of the room (where doors are placed) makes this necessary.  But the 18 inch cubes fit perfectly   When the paint is fully cured (they dry to touch in a couple of hours but curing to "you can wash it with soap and water" is said to take 14 days)  I'll take the lids back outside and give them a good polyurethane top coat.
Collapse