A Day of Remembrance

Yesterday Jim’s friends gathered to remember his life and spread some of his ashes on a meadow in central Texas.    Jim was a multi-talented man with many interests, generous with his time and skills in helping others, including me.   Jim solved computer glitches.  Jim helped my husband finish building Cloud Pavilion, one of our rain barns that collects water for wildlife on our (dry) property.   Jim designed jigs to help New World Arbalest produce better bolts for their crossbows.   And I heard of many more things Jim did to help others, in the years that I knew him.

Jim also suffered from serious mental illness that sapped his energy and his joy, worried his many friends, and finally ended his life, in a successful suicide several weeks ago.  In some belief systems, this is unforgiveable.  In some peoples’ minds, it’s cowardice and moral weakness.   But suicides, like homicides, come in many varieties.   Jim had been in treatment, with multiple drugs, with multiple interventions and hospitalizations, over the years.  This was not a person who chose “a permanent solution for a temporary problem” but a person who, after the many failures of therapies and drugs, could only see his as a permanent problem that became ever more intolerable.  Exactly like someone with an incurable physical illness that causes them great pain or loss of mental function and causes great distress to those who love them.    Although there are advocates for assisted suicide for those with such physical problems, there are none for those with incurable mental problems–and I understand the reasons very well.   I also understand why those with long-standing mental illness that does not respond to treatment may choose suicide.

Our autistic son, to my surprise, spoke up as others did–but differently in that he was typically blunt about what happened…others skirted the reality, but our son said, along with other things,  “I’m sorry Jim killed himself.”   It’s the part we all–all Jim’s friends–had a tough time getting around.   We knew he was hurting.  We tried, in various ways and amounts, to be supportive and helpful.  It wasn’t enough.   We’re all sorry he killed himself.   And yet…as with any terminal illness…there’s also a little guilt-producing relief.   No more suspense.    No more worry if it’s safe to leave the house for an hour or so, if it’s safe to let the other person out on his own.     It’s over…for Jim, and for us.

Those of us who have also suffered depression wrestle with the guilt that for us, the treatments worked–why not for him?  Why were we the lucky ones?–but also have the relief of having made it through a dangerous passage, and the fear that maybe, someday, we won’t.   But right now–we’re here, and understanding a fellow sufferer’s reasons.    There may be survivor guilt in some hearts, but there’s also survivor joy, and a reminder that even if, in our own dark hours, we can’t really believe anyone could love a severely depressed person…right now the evidence is clear that people do.

We were blessed in having space to offer–a meadow where Jim had walked whenever he came to visit,  a meadow brilliant gold with wildflowers in the spring, as a place for the gathering and spreading of ashes.  And a house  in which to hold the reception afterward, both room to gather and room to be separate for those who needed a little more time, and that alone.    It’s summer here now, and dry, with cracks in the ground, and the meadow is brown…but I’d sent pictures of it in spring to Jim’s family and some friends.   It often functions as it does for me, as a breathing space, a space where people can go out in turmoil or distress, and come back calmer, having let the land itself speak–the silence, the shapes of beauty,  a space that isn’t already full of human things and human opinions and human distress.

The rest of the time, as people came back from the meadow where the ashes were spread, was spent (as usual at such times) in eating a lot and talking a lot–some more Jim stories, and other topics as well.

The only difficulty, for the person in charge of arranging the material side of  things, was not knowing how many would come, or what those bringing food might bring.  Of course we ended up with too much…but equally of course, that was the right amount.    I’d been told there might be twenty coming.   Calculated for 25-30.   And we had a full three dozen….with enough food for more.   People ate and ate and ate (as they need to do at such times)  and consumed gallons of iced tea, punch, and sodas, as well as water.   (Did I mention it was HOT??)   And talked, of course.  As time went on we had the main group (in the back room, the largest) and satellite groups in the kitchen, the living room, and outdoors in the carport near the ice chest.

One of the guests made a plaque to hang on the rain barn Jim helped build, with the names of the men who worked on it.   We’ll have a little ceremony when we hang it up (that rain barn is too far away to make people walk it on a very hot day, and the fire danger’s too high to drive there.)   Even with chairs out in the meadow, some people were having heat problems.

The best of Jim, the happiest of Jim, was present yesterday, in the memories of his friends–friends he often doubted he had.   Though we cannot forget his misery, his mental anguish, we can and will remember the times Jim was happy, the times Jim was fully here for us. 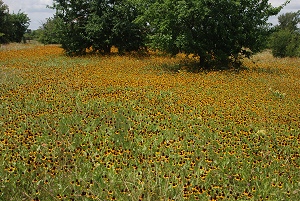 This is the meadow--earlier in spring of course--where part of Jim will always be.
Tags: friends
Subscribe