I make a lot of mistakes while knitting.  Not as many as a year ago, or as many as when I first started on socks, in January of this year, but still...mistakes.   I've learned to fix a lot of mistakes and--on second thought--ignore some mistakes (a twisted stitch in a sock?  Ptui.  Not worth the time to bother with it.)    Dropped stitches are now a routine fix, although--since I have trouble picking up dropped purl stitches on the purl side, but find it easy to pick up dropped knit stitches--I just turn the work and pick up the knit side of the purl stitch.    Inadvertent yarn-overs, picking up some other strand than the one I meant to...all routine now.  I've purled where I meant to knit, knitted where I meant to purl, slipped stitches I shouldn't have, knit stitches I should have slipped...and become much calmer about the discovery that this line of ribbing moved itself over one six rows ago, and then moved back three rows ago.  (It's not a bug, it's a feature.   Should that sock ever be stolen, I can prove I knitted it.   ("Right there on the back, Judge, five rows down from the cast-on,  there's a three row jog in the ribbing.")

But yesterday I made a new, unbelievably stupid mistake...such a mistake that I stared at it last night (was knitting before bed, as I often do) and simply stuffed the sock, five double-pointed needles, and a cable needle back in the sock's personal plastic bag and went to sleep.  Surely things would look better in daylight.  It didn't, much, but I had some sleep in between and better light to work with. 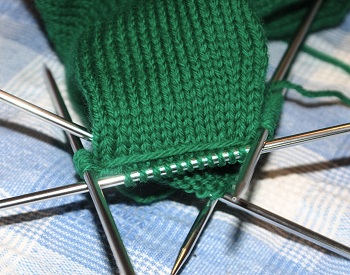 See that strand of yarn running alongside the needle, across the stitches?   That's it.   What I had done was fail to check that I was starting to knit where the working yarn actually was.  The yarn had become entangled in the needles, and I mistakenly started knitting one needle past where the previous work ended.  I didn't find that out until I was back where I should have started.  The solution, though, was pretty obvious in the morning.  Carefully work along the stuff I'd knitted with the "loop", gently pulling it free of each stitch so it wouldn't be too fuzzy to use later,  picking up the stitches below as I went along, carefully not knitting with the increasingly long loop this made as the "loop yarn" came free,    The J-shaped cable needle held all the stitches on one needle at a time, as I freed them, then slid them back onto the needle they'd come from.

Now everything's back as it should be, six or seven rows on, and the slight unevenness in the first row after starting again will even out when the sock's finished and has been washed a couple of times.    I will be very careful to ensure that it doesn't happen again.   The most useful tool was that J-shaped cable needle, though a smaller size DPN would have worked too.

Most of my mistakes occur when I'm working in less than perfect lighting.  Old eyes, maybe, or still insufficient knitting experience.   I'm thinking of getting some of those magnifying glasses with built-in LED lights, when I want to work in part of the house that doesn't have a bright light nearby.   But I'm also thinking of writing and illustrating a book of "Knitting Mistakes and How to Fix  Them."  I don't find fixes for some of the mistakes I've made in the books I've got.