The New Bike: The Fitness Project

As I mentioned before, various things led to being a lot less fit than I wanted to be.  The mountain bike I was given didn't fit me and was also not suited for carrying stuff around the place when I wanted to work on something like clearing trails.   So I went looking for a new bike, with the help of a friend who commutes by bike and knew a really good bike shop.    The new bike and I had an adjustment period, but it was much shorter than with the mountain bike (AKA "Grace-the-Assassin-Bike" from my character of Aunt Grace in the Vatta's War books)  and today I was ready to ask my husband to take some pictures of me riding NewBike out on the land.  NewBike hasn't generated a name yet. 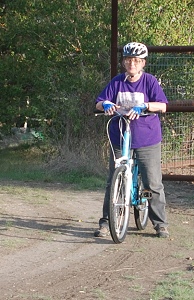 At the starting point, in the north horse lot.  The gate to the barn lot is behind me, the gate to the back yard--open--is on the left.  I'm at the "inside corner" of the horse lot, about to ride across it to the gate out to the 80 acres. 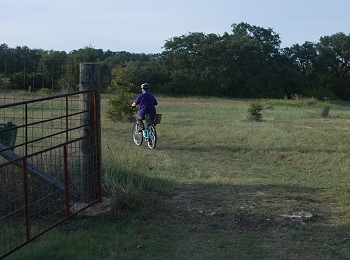 I've made it across the north horse lot, out the gate, and am starting across the Near Meadow--slopes down to a natural drainage, then back up to an old dredged ditch, where we put in some rock to make crossing it easier with the tractor. 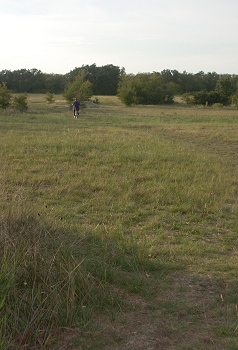 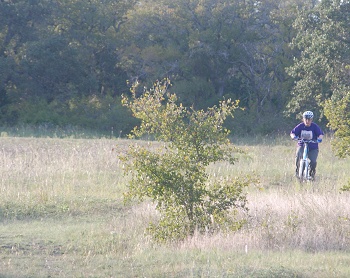 Coming back from the dry woods corner, downhill to the ditch crossing (straight shadow line lower part of picture.   The next shots were with the zoom out, so perspective is flattened.   I'm on a mowed path--that was a cow path when we moved here--and the mowed paths are safer than walking in tall grass in rattlesnake country.  There's a mowed path that parallels the ditch to the south property line, and then runs west down to the creek woods, past Cloud Pavilion on the way.   There's a mowed path all the way along the edge of the creek woods, south to north, and so on. 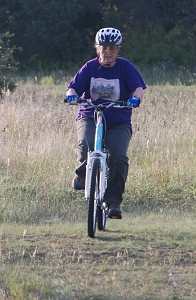 Making the turn from the path I was on to the ditch crossing and the path back up to the horse lot starting point.  Another shot with some zoom lens action. 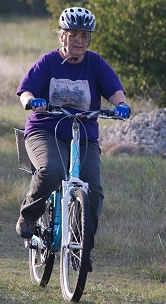 Over the ditch crossing and partway across the Near Meadow.    Today I rode up to the Dry Woods corner and back twice.   By this second time, I was getting a bit tired.   NewBike also has a front basket (detachable) which I'll be using soon to carry camera & binoculars out to the land, while the rear basket will hold tools--fence pliers, the small lopping shears, folding pruning saw, and the like.   And also for local grocery shopping.  So after many years without a bike (that would be "many decades"-- actually: haven't had a bike until August this year since I was in college), I'm now back in the ranks of cyclists, albeit the slow end of the pack.  And yes, those are gray hairs showing in the pictures.  I hope to put many a mile on this bike, riding around the place and back and forth to town for errands to the post office, bank, and small grocery store.