A Year In Socks

One year two days ago, January 26, 2012, about this time in the evening (late to start anything)  I  decided to start knitting socks.  I had never knit socks before (my mother had)  and I had no actual pattern...but, I thought, I have feet, and feet will be my guide--plus various sources online and in a book I had recently acquired, Knitting Rules by Stephanie Pearl-McPhee, otherwise known online as Yarn Harlot.  The hour had come--I knew if I put it off it might be days or weeks before I felt so strongly again.  And so began the adventure of the Year of Socks. nbsp; My first post about it was January 28, and had a picture of a tiny frill on the needles.

I've posted from time to time about the progress in knitting socks, but I thought it would be fun to do an anniversary post.   Tonight (later than the anniversary due to mistakes and interruptions)  I finished the ninth pair since I started...Purple One.   The pictures of the Year of Socks show Purple One about half-finished, on a clear sunny day last week.   I knew from weather forecasts that it was the last day I could put all the socks outside and hope to get good photographs of the Sock Family. 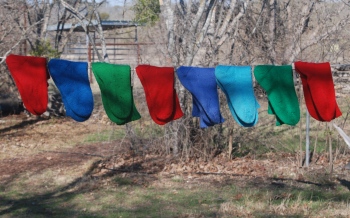 The first eight pairs draped over the line, in order of production from left to right.  The second blue (between the second red and the turquoise) is actually several shades lighter--it was still very damp.    I wear only the hand-knits now, because they're so very comfortable, which means I will have to knit a black pair to wear with my concert blacks before a Mozart mass our choir's going to sing.  Somehow I suspect that any of these will manage to peek out and ruin the effect.

Here's a comparison of the first pair (red) and the eighth pair (red) which shows how the sock shape has changed as I fitted it better to my feet.  Also...I make fewer (never no) mistakes: 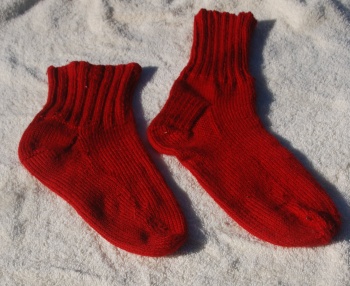 Red One had too short a ribbed cuff, too wide a ribbed cuff, almost no stockinette between the ribbing and the gusset, no heel reinforcement, and a foot that was too big around and barely long enough.  Yet it functioned as a sock, and has been worn around 100 times in these nine months--I loved the feel and wore it as soon as it dried after washing until I had knitted enough socks that it could be on my feet only once a week.  Red One is now showing considerable wear (though no holes, but visible thinning of the wear areas.)    Red Three has narrower, taller ribbing (I like 5 inches), an inch and a half from ribbing to heel flap (where the gusset starts), reinforced heel flap, a foot that is narrower and a bit longer--and a right and a left sock, fitting more smoothly around my toes.

Here are all eight pairs complete last week, with the partly knitted purple socks on the needles: 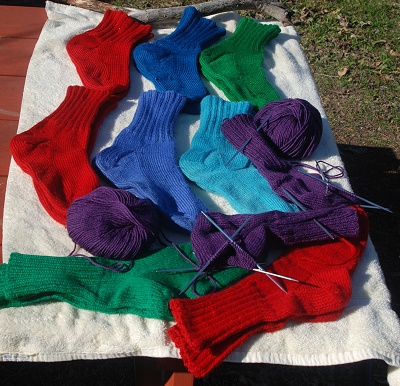 The order of production is L to R on each row, with the first row the earliest and the bottom row the latest.  The third pair was the first on which I tried reinforcing the heel flap.  The fourth pair, Red Two, lacked that reinforcement but took another two stitches off the foot circumference.  To that, I added heel reinforcement in all subsequent pairs.   The first eight pairs were knitted with Ella rae Classic; the turquoise was also Ella rae, but Classic Superwash.   All are worsted-weight, knit on US 5 needles.  I like thick socks.  On its second machine washing (delicate cycle, cold water) the turquoise fuzzed up and shrank a little, becoming denser.   So I went back to hand-washing.   It's not that hard.

The purples were knitted with Cascade 220 Superwash and will get one experimental trip to the washing machine after they've been test-hand-washed.  I love the color.   In fact, I like a lot of the colors in that brand, so I'll be knitting more socks in it.

I like knitting socks (and even more, wearing hand-knit socks)  and find it relatively easy.  Socks are handy project to take places like hospitals and on trips.   I knit them in pairs (casting on the same day, turning heels the same day, finishing the same day.)    In between the days when I want to do certain bits together, they're kind of like a horse race--one sock gets ahead, then the other sock gets ahead.  In terms of time, the first pair took me two months...and the eighth pair took me three...while most took about a month to six weeks, and the purples were done in two weeks.  It all depends on what else is going on.  Some people are faster knitters; some people have more time to knit; some people are slower knitters...and clearly my knitting speed varies from "reasonable" to "snails that slow die of old age between one rosebush and the next."

But to keep wearing hand-knits--which I hope to do for the rest of my life--I need to knit more...quite a few more.   If 100 wearings is the approximate lifespan of a 100% wool sock knit the way I knit them, then 7 pairs, each worn once a week, would last about two years.  14 pairs, worn in a once-every-two-weeks rotation would last 4 years.    And so on.   The thinning areas of Red One remind me that these socks, like all socks, will wear out, and there's no place to buy socks that fit like these socks.   So the Sock Project continues, with the aim of getting a lead on the socks wearing out,  so I will (in a year or so) be able to handle replacements at an easy knitting schedule.  In aid of that goal, I've been buying more yarn (sure, that's the only reason I ever buy yarn...more socks totally explains the hand-painted rayon lace-weight, the wildly colored cotton/silk/wool blend...)    Here are some of the yarns (except two that snuck into the picture by mistake) that are on the "to be socks" stack: 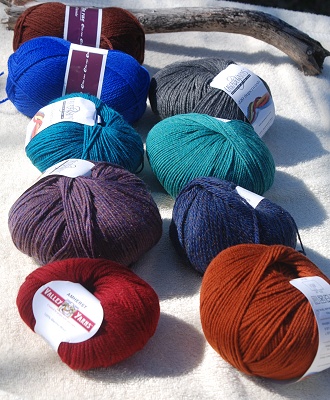 The little dark red ball in front is too small (I have larger feet than that will cover) and the dark blue behind the rust is too loosely spun for socks (I think.)  Both are colors I want to find in 100 g balls in tougher yarn.   This bunch does not include additional balls of the yarn the first nine were in...I want more of all of them, plus some new ones for variety.   Some have been...er....ordered already.   I found this gorgeous discontinued-on-sale selection  with the *perfect* variegated blue....(yes, the stash is growing.   Not yet beyond lifespan, even given my age, but....it's an incentive to knit it down.)

If I get a picture of the purple socks complete soon, I'll add that to this post.  (now to see if THIS TIME I've gotten the LJ cut to cooperate...)

EDIT:   I wore the purple socks on Wednesday, after completing them Monday--so the choir people who are interested could see them.   Today, Thursday, i washed the green pair I'd worn Tuesday and the purple pair.   Not entirely to my surprise--since the yarns feel different to the hand--they felt completely different both in the water and wet.   (Yes, I handwashed the purples, even though they're Superwash wool...and probably will keep doing so.   Most things last longer with hand washing.)  The Ella rae yarn (in general, and in the green socks) feels firm when wet, the sock a little stiff, and softens on drying.   The purple yarn (Cascade 220 Superwash) feels soft and almost flimsy when in the water and even damp from being rolled in a towel.  The green socks had been on the line an hour or so when I put the purples out (in between I rode my bike up to the post office) and the purples felt lighter--as if they had less water in the wool--when I hung them out than the green ones (I lifted them off the line to see.)

Another difference is that the brighter colors of the Ella rae (Classic or Superwash) run in the wash water.  The purple--which I expected to run--did not. 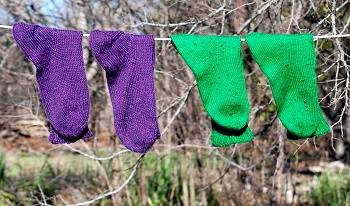 I'll be interested in how the purples  feel and look when they're dry, and also how long it takes them to dry.  If they're releasing more water from the squeeze and roll in the towel, they may dry faster.  The people who saw them last night at choir were impressed--everyone liked the color.  It's impossible to assess the durability of these socks until a pair wears out.   I hope they'll do as well as the other socks are doing.  That pair of green socks was knitted in May of 2012--finished about the end of May...so it's been worn at least once a week (more, before I finished more pairs) for eight months.  It's still in good shape.

The next pair, Turquoise Two, now has over 3" on one cuff and 2" on the other.   Again, the difference in feel is considerable.  The Cascade 200 yarn feels softer and silkier to my hands, but also fuzzes up more when I need to fix an error.  The Ella rae yarn is a little harsher, but tight enough wound that it doesn't fuzz when I pull out a stitch.
.