The fifth and final volume of Paladin's Legacy, Crown of Renewal, officially debuts tomorrow in the US.   (It's been out about a week in the UK, and sneaked out the back door to arrive at Balticon and into a few stores a day or two ago.)   For those unaware of what I've been writing the past umpty-ump years, Paladin's Legacy is the story of what happened after Paksenarrion found, and saved (more than once) the future king of Lyonya.   My original plan for the books wasn't the way they turned out, but the way they turned out is (as so often happens) a lot more interesting.   Not, however, easier to write.

Originally, this was going to be Kieri's story.   Once I started, I realized that it couldn't be...that Paks's deeds had affected more than one person in the earlier books, and the "true" story had to deal with the great changes in the lives of many of them.   She was the catalyst, or the person on a mountain trail who kicks a boulder off the edge and starts an avalanche.    She never intended, or expected, to have as much effect as she did.  Like most of us, she has a fairly short range on the "futurism" side of things.

Realizing this kicked me at once into another multi-viewpoint story (OK, I've done that before) in a setting that had always required much more depth and complexity than the SF books...which themselves aren't exactly simple.  Holding everything down to a five-volume length was...very, very tricky.  Every one of them wanted to grow much larger than it did, with characters tugging on my mental arm and shouting in my mental ear that I was not giving them enough air time.   Complicating the situation (a lot) was being unable to find the carefully saved notebooks of details (some not explicit in the original Deed of Paksenarrion, but many more that were)  which I needed to stitch together the seam between old group and new.  Similarly, the old master map, which I  knew I had put under a protective sheet on the old drafting table...was not there.

But the story wanted to be told, and a story that wants to be told gives the writer no rest.  So away I went, clickety-clacking over the keyboard, buying more big sheets of drafting paper, redrawing the map,  looking up details in the old paperbacks (and then asking for help finding things.)  And the story grew, and grew, and grew....proliferating like an over-fertilized pumpkin vine, all directions at once and all of them (they insisted) absolutely necessary.    I don't write with a theme in mind...the story takes me where it will...but the story knows what it's about.  One of the things this story is about is the reality of change--that everything changes, and to keep living means adapting to change.   But it's also about the choices people make when faced with change...and it's also about second (and third, and fourth) chances when past choices turned out to be bad ones...and it's also about the long memory of horses...and it's also about the way good ideas may be warped over time into very bad ones...and it's also about...many more things than that.

The final "braid"--weaving in the tail of the story, all the points of view, all (or nearly all...always leave something open, a door for imagination to continue) the subplots--is always a challenge in multi-viewpoint, multi-volume works.  Who should have the real last word or scene?   In this monster (and it is a monster) it often felt impossible...nothing was going to work.  But then it began to come right, and then...at long last...it was done.  To the extent that any story is ever "done."

Readers bring their own imagination to stories--each reader introduces her/his own past experiences, including reading experiences, into what's on the pages.  No two people, I'm convinced, see the characters the same, in a book (a movie provides explicit visual data; a book suggests.)   Readers enrich their own reading that way, and the writer cannot guess what they will use to do so...perhaps a table setting seen at a banquet, or a room in a farmhouse, or the sound of wind battering shutters.  Words suggest--and then the reader's imagination takes over, partnering with the writer.   Stories I read years ago still live inside my head, even when I haven't re-read the book for decades.  In my mind the story doesn't end with the last page--however satisfying the writer's ending is--because the thoughts and feelings roused go on.

For those who haven't read any of the books, but are tempted, the best places to start are with the original Deed of Paksenarrion (available from Baen Books in print or as e-book) or with the first book of Paladin's Legacy, Oath of Fealty (available in print, e-book, and audiobook.)  There's more info about the volumes on either my website or the Paksworld website (which has  a lot of useful background, if you want to start with the new group.)   The Paksworld blog is a project specific blog, for fans of the whole group of books (now ten, in three different groups.)

Meanwhile back at the writing-ranch (not really),  there's a collection of related fiction in the assembly process, and in the fall, I have a story in Shattered Shields, an fantasy anthology edited by Bryan Thomas Schmidt and Jennifer Brozek.   Here's the cover for that: 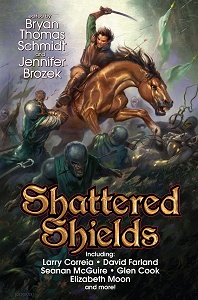 And I'm working on a proposal for something completely different, which may or may not pan out so...not talking about it now, except to Agent.
Tags: book release, writing
Subscribe