On Wednesdays, a food co-op leaves boxes of produce at church--outside, in a little courtyard--for its members to pick up.   Arriving choir members headed for supper in the church and then rehearsal, like me, pass by people poking through the boxes and making their choices. Even if no one happens to be there, no choir member would think of snitching a carrot or onion or zucchini.   Exiting choir members after rehearsal (hours and hours later)  see empty boxes on the table and sigh.

Last night the unexpected happened.  The food co-op made its usual delivery sometime in the day, as it does, but...no co-op members showed up to pick up their share.   At least not that anyone saw.  There the vegetables were, out in the hot (and it was HOT) sun, wilting by the hour.   And when the choir emerged from rehearsal and started to leave, the church receptionist said "Nobody picked up the food from the co-op today...go for it."   The alternative was binning it, because leaving it out there overnight would have made the rats happy, but no one else.

And some of us did.  It was dark out there, only a little light from the spotlight near the sycamore tree, so we were pulling things out of boxes and having to smell and feel them to figure out what they were in the dimness.  (The hoped-for bunch of basil was something no one recognized, but Julie took home.)   Tomatoes, if any, had vanished before I got there, but I came home with things I've cooked a lot with (various peppers, a cucumber, a zucchini, three sweet potatoes,  a small onion, a little bag of purple carrots) and something I hadn't: eggplant.  My husband had previously expressed a dislike of eggplant, so I just never cooked it (I didn't much like it myself, the ways I'd had it.)

But I'm a firm believer in the power of major soup to overcome any ingredient that doesn't make me sick (as broccoli, for instance, does.  Or cabbage.  About fifteen years or so ago,  cabbage in soup turned from a perfectly reasonable addition to a stick of dynamite in the innards.)   I had some other vegetables handy, and just last week had made a fresh batch of chicken stock, that superb base for so many soups. 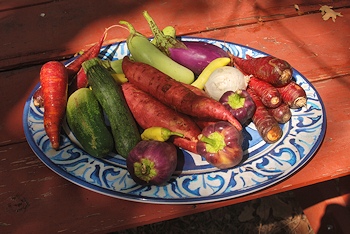 To these will be added more onions, diced tomatoes and green chilis, a yellow and a green sweet pepper, spinach, corn, some white beans (soaking now), celery, and garlic.  And of course bay leave and thyme and basil and peppercorns and...whatever else strikes my fancy.   My soups tend to be free-form--whatever's around goes in them, the more the merrier.  Some of these will get a pre-soup-pot roasting.  My guess is that we will decide we like eggplant in soup.

I'm sorry the people who should have picked up this produce didn't--clearly they missed some good stuff--but I can't help being glad of the chance to try out eggplant in soup without investing in it.
Tags: cooking, soup, vegetables
Subscribe