Here's an image of the socks mentioned in the previous post.  As usual, the green doesn't look right, but the other colors do, so...imagine a rich, intense emerald green with that royal blue. 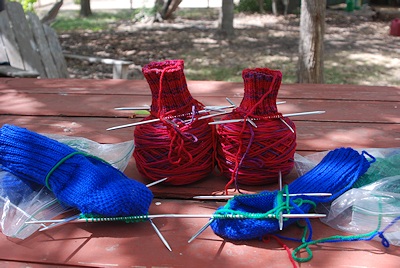 Both blue and green socks are on the gusset decreases but not far along. One shows the heel reinforcement pattern they both have.  The feet of these will be striped in emerald green and royal blue because--not enough royal blue to finish.  (It's not a bug; it's a feature.)   I hope to finish the gusset decreases today and get on to the race for the toes.
As soon as the blue/green pair come off the needles, I'll cast on a pair of Herdwick wool socks for the coming winter (Yeah, I have only enough #5 needles for two pairs of socks at once...)   The Herdwick yarn's a little harder to work with, so when the red/purple come off the needles, a more ordinary yarn will take their place. I think I'll alternate Herdwick and ordinary yarn (defined as other than Herdwick, for now) through the winter, and then switch back to shorty socks with the leftovers of the winter's knitting for another week's rotation of summer bike socks.