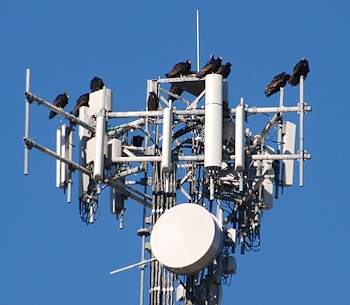 Although not all the cellphone towers around here have a steady population of vultures--and I can't quite figure out why--some are often crowded with them in early morning and late afternoon/evening.   Sometimes only one species inhabits a given tower (this tower "favors" turkey vultures; another about 5-6 miles south-east has a large population of black vultures.)    Occasionally a hawk will rest on a tower during the day.   Cellphone towers give vultures a "lift" on  by giving them clear height to take off from, plenty of room to build up airspeed.

You can tell turkey vultures from black vultures even when perched by their naked red heads.  Black vultures have blackish-gray skin on the head. 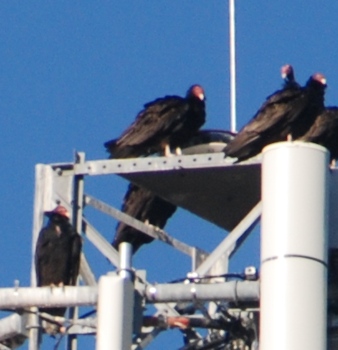 This tower is not as heavily populated as the one SE of us, which in the morning before they fly often has 100 or more black vultures perched on all the cross braces, from about 12 feet above ground to the top.  If I happen to drive by that tower at the right moment (as I did this morning) that means a huge crowd of black vultures flapping vigorously to get off the tower and into the air.

Cellphone towers offer a new habitat type for vultures in this area, which is poor in tall trees.  Vultures do roost in trees (used to, more than they do now) but the towers are much higher and are well above obstructions like lower powerlines (some very tall powerlines are almost as tall, but not--around here--near cellphone towers.)   Any new non-natural constructions offer opportunity for wildlife to make use of it in ways not foreseen or intended by the humans who built it, and cellphone towers are no exception.