I grew up in South Texas, and moved back to Texas after a few years in Virginia in the military.  Texas had powerful sun when I was a kid, and the ozone hole made its sun even more likely to burn than tan.  Though I wasn't one to lie out in the sun trying to get brown, I've always spent time outdoors: riding a bike, hiking, riding horses, just walking around, etc.  I tanned well, never burned (well, I wasn't spending hours in the sun trying to tan.   Back then, we considered suntan lotion to be what you used in order to tan or keep skin from drying out--not protection from sunburn.   I hated the greasy, gummy feel and the cloying smell, so used it only rarely, when I knew I'd be outside a long time.   I wasn't getting sunburned, so why bother?   So...despite using more care (once I knew to, which was sometime after 25)  I was browner than my natural skin tone on face, arms, lower legs for much of my life.   Less, as I got older, because of the aforementioned caution, but also because I was raising a kid and writing books.

You probably see where this is going.


I've noticed in the past five years or so that I don't tan the same way I used to--evenly, smoothly, without burning (I've had one bad sunburn in my life, shortly after moving back from Virginia, when I'd forgotten just how potent Texas sun is.)  There were freckles, pale spots, a dry look (in someone who'd always been told her skin was oily.)  This summer, when I had been riding a bike bare-armed almost every day for several months, I got a mosquito bite on my right arm.   It itched, of course.  I tried not to scratch, but I'd forget.   Time went on.  The itching lasted longer than it should.  I looked at the spot--a little reddish, a little raised, dry-looking.  A little sort of scaly.  OK, so lotion.   Eased the itch, but...I gave it two weeks of carefully, mindfully, not messing with it other than a little body lotion and of course sunscreen when going out.  But no--there it was.  Mildly itchy, definitely reddish, raised, scaly.   I could see about 4-5 mm of raised, mildly pink, with a smaller bit of scaly-looking stuff, maybe 2-3mm across.  (Judged by using my needle and stitch gauge from knitting.

So, having seen skin cancer left to become very, VERY obvious on other people,  to the point of requiring a lot of cutting and then plastic surgery,  I consulted a physician.   Indeed, said the physician (I'm not using his exact words.)    Certainly could be a small skin cancer and it's great to see one so early.   Could still be "just" actinic keratosis, but that's the precursor.  Good time to get rid of it.  Here are the options, take your pick, but I recommend this one.

I had by then found (by feel) another smaller slightly raised area an inch or so away from the first,   That one too, he said.

So I'm now using a medicine called Fluorouracil, a cancer drug that's a DNA poison and targets fast-replicating cells made up into a topical cream for surface application.  After only two days of treatment, it's obviously doing something.   I've been told the surface appearance will get worse, like a burn, over the course of treatment, as the bad cells die off. 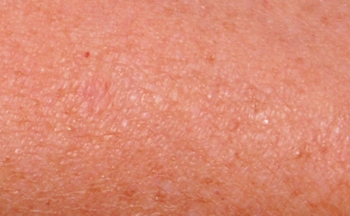 This is a photo from today, Day 2, with the main concern just left of center where it looks a tiny bit pinker and definitely a different texture pattern.   Hard to see, if you don't know what you're looking for.  This is not the original photo, but a histogram adjustment of it, which shows the different in that area a little better.   Less brown, more pink.  Gamma, High, and Midtone compression all affected.   It's not that different from two days ago--the differences are subtle, clear to me but you might not think, looking at the original, that there was anything but a small local irritation, maybe an insect bite.

Being able to tan easily in youth does not confer protection against skin cancer in one's senior years--quite the contrary.   Had suntan lotion been greaseless and smelled like pine/spruce/fir,  I'd probably have used it more--in recent years I've had and used a very heavy (still disliked) SPF 100 type when I was going to be outside after 9 am or before 6 pm, but...that wasn't enough.  And in everyday chores--hanging out laundry, walking aross the parking lot to the grocery store--I figured that was such a brief exposure it didn't count.

Assuming that this is the usual garden-variety sun-damage type of skin cancer, it's completely treatable, and it won't "do anything."  I've been checked over for melanomas (none so far.)  But it's still there, and it's still a cancer, and it's still unnecessary...I could almost certainly have avoided it if I hadn't thought that I, like my mother (who never got a skin cancer despite years of sun exposure--she also tanned easily and darkly)  just wouldn't ever get it.  But only half my genes were hers--the other half came from a blue-eyed, lighter-skinned father.

Take-home lesson?  Take the precautions.  Get enough sun exposure to make your own Vitamin D, if you've got the skin for it, but don't assume the crab will never grab hold of some skin cell DNA.