While the skin cancer's being treated, I'm supposed to protect the treated skin from sun exposure (and yeah, all skin should be somewhat protected from skin exposure.)  This means that since through today it's been up in the mid-high 90s, I can't really get out on the land or ride the bike, because it's too hot to wear dense long sleeves while exercising.   Sweat is one thing, but heat exhaustion is another and I no longer have the heat resistance I had as a kid.  Funny thing about that.  Anyway--I can stand to wear a denim shirt over a T-shirt while walking briefly out to the grass garden.   Which now looks like this: 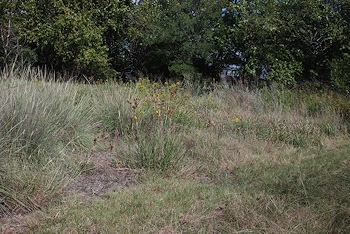 This is an area that gets runoff from the street where it dead-ends at our fence, so it's able to sustain some tallgrass species without extra watering.   Before we got the 80 acres, we were already collecting native grass and forbs from construction sites where they were  about to be destroyed, and replanting it here to propagate in hopes of someday having land for it.  Visible in this picture are Lindheimer Muhley, Eastern gama, Indiangrass, and Switchgrass, plus Maximilian sunflower and Goldenrod, as well as the dead stalks of Eryngo that flowered a month ago.   In wet years with a good spring forecast, we dig up root divisions and move them onto the 80 acres--some have done well (including Big Bluestem)  but the thriving Switchgrass and Eastern Gama that was doing well on the seasonal creek bed died with the drought when the creek was bone dry all year long two years in a row. 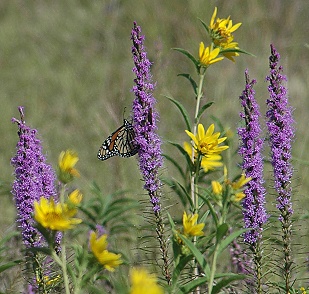 This image of Gayfeather (magenta) and Maximilian sunflower with monarch butterfly is from another year, when the monarch migration coincided with the peak of Gayfeather and Maximilian flowering.  This year they're out of synch--climate change affects their migration time as well as when these flowers bloom (and how much, as heat and lack of rainfall stunts or delays flowering.  But these colors are present in and around the grass garden.

Also in bloom right now is Mealy Blue Sage, a forb that blooms when there's enough rainfall.  We had a good solid rain a couple of weeks ago, so we have a good display of heavenly blue from this clump in what was the little orchard (the fruit trees all died in the drought.)  Mealy Blue Sage grows on thinner drier soil (thus not in the grass garden)  and among shorter grasses. 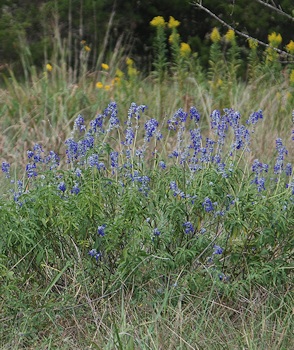 Both Goldenrod (taller) and Maximilian Sunflower are the yellow spots behind the sage.   Another blue fall-flowering sage (this one flowers only in fall) is Pitcher Sage, one of the old tallgrass prairie survivors.  I don't have any pictures of this year, but here's a picture from a previous year.  Pitcher sage grows long and tall, to stay with the tallgrasses it used to have around it.  In this shot it's leaning sideways, because its very long stalk isn't supported by surrounding tallgrasses. 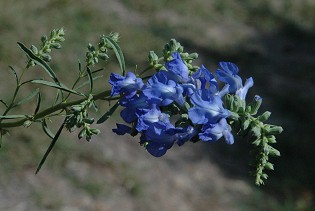 The warm-weather grasses are blooming now, both the short ones, like Buffalograss, and the tall ones: Big Bluestem, Indiangrass, Switchgrass, Lindheimer Muhley, Eastern Gama.  Oh, and some of the midgrasses: Little Bluestem and Sideoats Grama.   But on a windy day it's nearly impossible to get pictures of that.