My mother was a knitter (and every other kind of needlework), and taught me, over a few Christmas vacations, to do simple knitting--garter stitch, stockinette, ribbing--and then knitting in the round with three needles.  But she made all the round things; I made scarves.  And then, away from her, one baby hat.  Then I moved back to a hot climate, and had the sweaters she'd made me if I needed sweaters, plus the hates and mittens she'd also made.  I quit knitting and went to other things.  When I started knitting again, I made scarves, until the breakthrough that started me on socks.  So much I've told before, here and elsewhere.  But last night and today...I came across her knitting-in-progress, in a workbag of hers I hadn't explored before.  The cuff of a mitten, and two sock cuffs for slipper-socks, one finished and one not.  None fit me now--my wrists and ankles are thicker, as hers also became at about the age I am.  But...there they are, her perfect, regular stitches in ribbing, white socks and blue mitten cuff.  (Picture below cut) 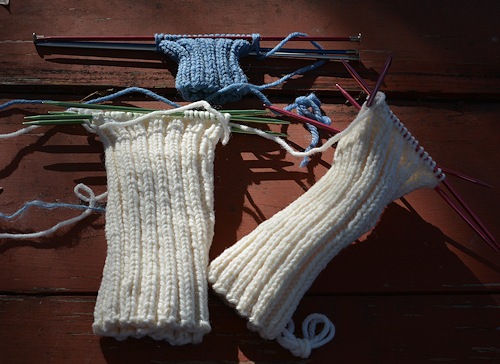 The white yarn is Coats & Clark:  40% wool and 60% "virgin Orlon, bicomponent acrylic (I don't know what that means, chemically).  The blue yarn is Bernat "Sesame", a 100% wool yarn not available anymore-she used it on a number of my sweaters. These yarns were available in McAllen, Texas, where she lived, in the 1960s and early '70s.  I believe the yarn was purchased in the mid-60s, from the pattern book date I found with the mitten cuff, when I was in college and she was knitting a lot.  Why these projects weren't finished, I don't know.  Something else was more interesting, maybe.  She made the two pairs of socks for me (made in about 1969/70)  just like these cuffs: 48 stitches, on size 4 needles.   (I now use 60 stitches, on size 5s.)

The sock cuff on the right is shorter than the one on the left, but about four rows longer than it was when I found it.

Because I could not resist working on the same needles with the same yarn to see (among other things) how different our gauge is.  I'd already put my foot through the work to see how the cuff felt--and I can get it on, but it's very tight.  I played around trying to match her exact tension, which seems (in this anyway) to be a bit looser than mine but not as loose as when I tried to be loose.   Also--with that much cuff done--why not finish it to match the other and then make socks?  These wouldn't be comfortable for me, with such snug cuffs, but they might fit someone else.  She was planning to mix yarns--what's left of the Coats & Clark isn't enough to finish a pair, but in with this was a skein of Red Heart, a slightly different white with the same ratio of wool to Orlon bicomponent acrylic.  I have no use for the yarn otherwise, really.  And...it's doing no one any good sitting there partly made up.  [EDITED...Duh!  I hadn't realized Coats & Clark made Red Heart and it really is the same yarn.  Named, of all things, "Fabulend."]

It still feels...weird.  Strange.  Inserting my needle in her stitch, moving her stitch off...adding an entire row, then another, so all the stitches on the needles were those I'd made.  Like extending the rows in a carefully designed but unfinished garden, or painting a border on the bottom of a picture.   And yet very satisfying.  These were her needles (all but one--I switched to five-needle system I use now), and what I touched, her hands had touched.  Every stitch bound her work and my work together like nothing else I ever did with her.  There was a lot she didn't teach me about knitting in the round (only that it took at least four needles, three to hold the work and one "traveling.")   I discovered that she arranged ribbing stitches on the needles the same way I discovered worked best to prevent laddering: start each needle with the knit stitches, end with the purl stitches.  Though she appeared to be knitting with just three standing needles and one traveler, she had left both cuffs with four needles in--with the split at the start of the row, mid-back.  There's a certain awe about trying to finish something my mother made--she made so many beautiful things--but also a lovely feeling of connection through generations.  Yes, Mother, your daughter finally got her act together and can make useful things with needles and string.

EDITED, FEB 2015.  And now the socks are finished, and off to their new owner, who likes them.  Here's a picture: 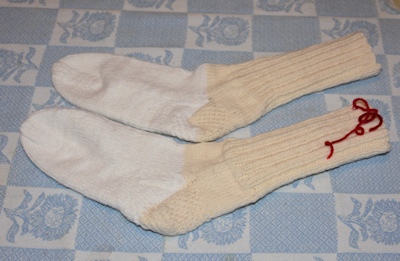 It turned out there wasn't enough of the cream-colored yarn to finish the socks, so I had to finish them in white.  There's there's a 1/8 inch difference in some areas of the socks, so I marked one--that way the recipient could then tell me which she preferred when I made her another pair.  I should have taken a picture next to one of the socks I make for myself, to show the difference in size, but...too late now.
Tags: heritage, knitting
Subscribe