Thanksgiving is the one big feast I do...yes, there are other parties, but they're all more casual.   For Thanksgiving, I pull out all the stops in terms of table decorations and food.  (At my level, that is.  Others do much more.)   Ordinarily, the prep starts back in October and carries on in an orderly fashion.  This year, however, the discovery that my husband has another cancer (discovery made about two weeks ago) threw my prepartion for a loop.  That plus various things in the Outer Real World.

However--though today has been a mad scramble and I'm not done yet--preparation has made progress. 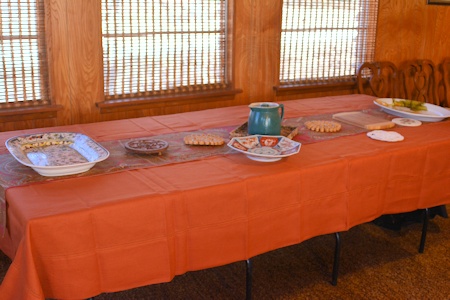 What will be the buffet table.  Actually two slabs of plywood with folding legs
bolted to them, that we made about 30-something years ago.  It has
a new rust-colored tablecloth.
This is the table where we'll eat, across the room from the buffet layout.   You'll notice the plates don't match.  It's a feature, not a bug--didn't have enough plates in the pattern I grew up with (the multi-colored flowers) and bought a set of six blue-and-whites to alternate with them.  No two of the blue-and-whites are the same--they're replicas of older stuff.  This table is newer, a major splurge a few years ago.  Before that used two tables that weren't the same width or height, and with unreliable drop-leaves.  One was the dining room table I remember from childhood; one is the one we bought a few years after we married.  Worked for years. 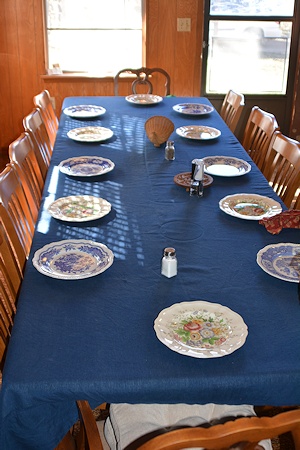 The table's not fully set, of course, and has no centerpiece--that raffia cornucopia partway down
is to remind me to lay out the apples and grapes artistically in the morning.
Yes, the plates will be centered on the chairs, and everyone will have flatware.
Right now there's a pumpkin pie in the oven and I'm relaxing online instead of doing the remaining rounds of chopping, dicing, slicing and sauteing so that tomorrow I can put things together fast.   I have a pint of homemade spiced pear/apple/red wine glaze for the ham in the fridge, the turkeys are mostly thawed, and all the ingredients for my half of the vegetable dishes (guests are bringing some, plus rolls, and desserts)  are all in place, except for some sauted onions and garlic.  Friends are bringing homemade cranberry sauce, sweet potato/apple saute,  green bean casserole,  pecan pie, apple pie, cranberry nut bread.  Should you wonder if we can eat all that...no, but we count on leftovers, and also having enough for any person who needs it.

Should you wonder why I took the pictures today, it's because many Thanksgivings running, I've been too busy and distracted to think about pictures until too late, as the others' taillights were vanishing up the street.  Maybe I'll get lucky this year and get a picture of the table in its full array, but probably not.  "Hey, Elizabeth, where's that little dish to put the olives in?"

What are we thankful for?  Life.  Health, however it is.  Friends.  And having a day to celebrate them.  There's more, but...I need to go dice some more onion and garlic and get with the slicing of carrot and celery sticks and the chopping of parsley and cilantro.
Tags: thanksgiving
Subscribe