Last week (Monday the 7th)  I was riding the bike on the land, checking the wildlife waterers and doing some trail maintenance  while R- was digging postholes along the south fenceline where he's building fence.   As I came around one narrow, snug turn (around a big juniper and between others on the outside) on the way back, I miscalculated my speed, tried to brake too hard, and lost control--and fell hard enough to lie there several minutes thinking "That was stupid...It really hurts...and this bike lying on me is not helping."    Yesterday, I rode the same trail, but walked it on the way out to see if I could spot exactly what I'd done wrong where, and realized that I had failed to compensate for the place where the slope changes (and speeds you up on the way back.)   It's not a huge change, but it was enough to get me going too fast to make the turn since I couldn't swing wider there. 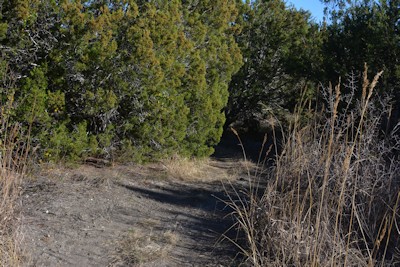 The first picture is taken from "above" that area, on the way back.   First I come off a little bank on a right turn (picture taken from the end of the right turn, while walking the turn yesterday--parked above it, walked back to take pictures.  You can see the track starting to turn left. 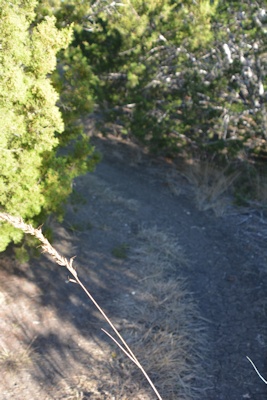 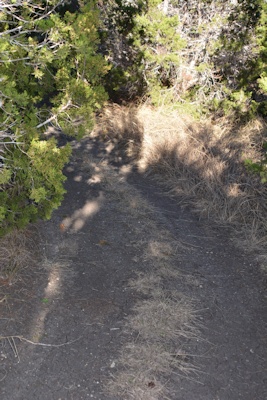 L: At this point I had realized I was going too fast and braked too hard.  Back end of bike came off the ground, basket hit me in the back, hard, and though I stopped I was off balance and leaning left--couldn't get me and the bike both back up. Turned over into tree on the left.

R: This is the continuing curve beyond the picture on the right. 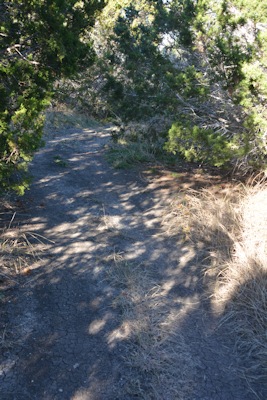 As soon as you stop turning left, you're turning right (and there's another S-curve after that, but shallower).   The tracks are made by a lawn tractor that we use to haul tools and supplies around (it has a little trailer) for building fence, servicing the water pumps at the wildlife waterer, carrying supplemental feed for the winter-resident birds, etc.  It's not nearly as wide as a car, which means we are leaving more habitat undisturbed.   These maintenance trails are, except on the open grassland part, very twisty,  often following old cattle trails from when this was leased land with cattle on it.

Riding any of the woods/brush sections successfully in both directions on the same ride feels like an accomplishment.  It's just scary enough and has some of the same challenges as riding a horse over fences (though this bicycle is not rated for any jumping!) in that how you come into a sharp turn matters, and so does setting up for a sequence of turns.  There are places (in the open) where you can let the bike "gallop on" and places where it's necessary to change direction, speed, "collection" (gears) frequently and rapidly without error--or else.

Riding on pavement (even rough pavement)  is very different.  I enjoy both and particularly enjoy that I can go places and accomplish things without driving.  Like picking up mail, going to the bank, going to the convenience store, the larger grocery store downtown, the old city park or the new one (the new one's trickier and involves a difficult highway crossing at one point, but...it's doable--all pavement riding.   Or going out on the land to do the trail maintenance and the water checks and documentation (by photography) of wildlife at the waterers and feeders more quickly than I can walking it.
Tags: 80 acres, bike riding
Subscribe