Today--in mild temperatures and under a sunny sky, I finally cleared enough chores to go out and work while the weather made that possible and the ground was firm enough (barely) to ride the bike out.    I needed to work on the east trail in the dry woods.  It enters the dry woods on the east side, near the north fence, and angles away from the fence until it meets the Fox Pavilion trail (entering the dry woods on the south side and emerging from it at the north fenceline on the west side.  First I rode up to Fox and refilled the wildlife waterer there.  Then I rode back down to the berm the east trail starts on, and headed east.  Very soon I had my first pruning to do. 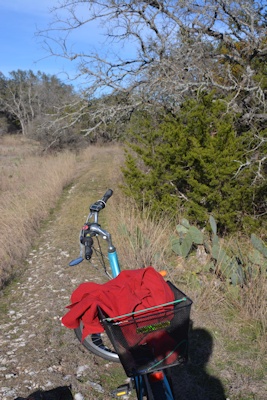 Branches of a cedar elm--some alive but leafless in winter, and some dead, hung too low over the trail for either a walker or a bike rider.    So I parked the bike and cut them away as high as I could reach.  The low cactus right beside the trail  (close to the juniper) is hard to see at this size, but will need to be pruned back or (more likely) dug out, as it's at ankle-catching height.

At the end of the straight stretch ahead, a live oak tree blocks more travel on the berm, so the trail dips off the berm to the right, then makes a sharp turn left around the tree and the dead juniper right beside it.  In between were a few other limbs to trim back (not seen here) but I didn't stop for pictures there.

When I rode down off the berm and around the live oak, I got a big surprise--the elbow bush had grown out in the trail so far that I had to bull through it or risk falling into a large stand of cactus. 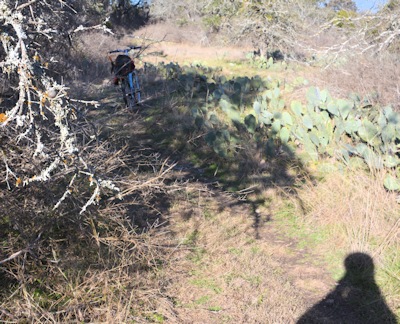 I parked beyond it and walked back to see how much I'd have to trim up.   I lightened this picture a little and it's still hard to see how far out the elbow-bush goes--but you can certainly see the dead live oak limb in the foreground and the cactus along the right side of the track.   This is at the bottom of the U around the tree.    Here's the "before" picture taken from near my bike: 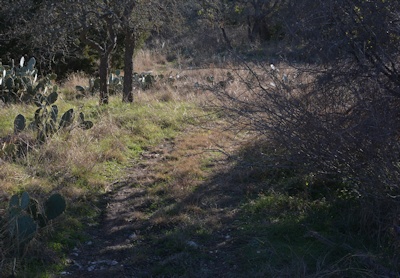 I had a lot of elbow bush to cut back.  And some of the live oak, though I tried not to cut any live branches.  Here's what it looked like after trimming: 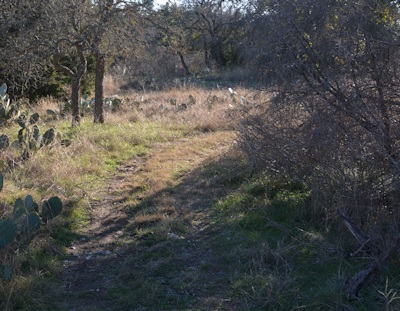 That one cactus is still inconveniently close to the side of the trail, and likely to grow out into it.  So a session with pickaxe and shovel is called for, plus the heaviest gloves.

I had a couple more stops before getting to the end of the east dry woods trail, but I've always loved coming out of the brush to see this: 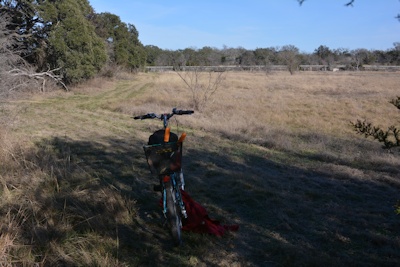 This corner often has a fine carpet of bluebonnets in spring.  Those big live oaks hanging their limbs down have their trunks on the other side of the fence, alas.  They belong to our neighbor to the north.   Like anyone who owns land, I have a touch of "Landowner's Disease" which leads to wanting not all the land, just the land adjoining mine.  It's rented out, with no one living in the house there.  Sad.  There was a little fruit orchard (now dead) when we moved here, and a good kitchen garden and so on.   All gone.

After trimming a little in this area, I turned the bike around and rode back through to the main dry woods trail,  the only way to be sure that the trimming I'd done was "enough."   (And in one place it wasn't, so I stopped and pruned some more.)   Then I rode on, up to Fox Pavilion, and out to the north west exit, the View Corner.  This is another place where the trail, after twists and turns, makes that one final sharp turn and provides a view of open grass, this time down to the creek woods (or would be the creek woods if it had water in it.) 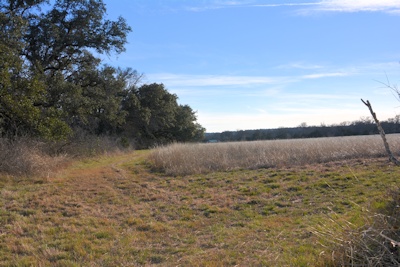 I took this picture sitting in a chair facing away from the sun, twisting around, and it's not quite level--tilted a little to the left.  But it shows the line of trees on the west side of the dry woods.   Many died in the drought, but some survived, in the deeper pockets of soil.

Facing into the dry woods, here's a group of cedar elms, with a very young live oak (the green leaves to the right)  and more small scrubby live oaks seen beyond the thicket.  The understory here is elbowbush; elsewhere it may be Mexican persimmon, elbow bush, bumelia. 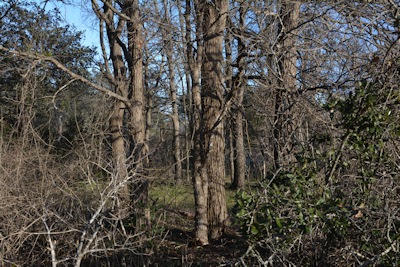 In between the elms, all down this stretch, are little grassy lawns.   Deer like to rest in them, and they browse elbowbush.   I used to have a trail there, until an experience with Mr. Buzzy, a very large* rattlesnake, which coiledup and made it very clear he had no use for humans in one of his favorite spots.  So I venture into the trees here only in winter, when he and his relatives are safely underground somewhere,  and haven't tried to keep the trail open.

*All rattlesnakes look very large when they're coiled up and buzzing at you.  Mr. Buzzy certainly had an impressive set of rattles and made an impressive stack of coils, but I am easily impressed by rattlers....into going somewhere else.

When I'd rested and had some water and a piece of bread--and the Northern Harrier who sometimes hunts the west grass, floating along just above the grass looking for cotton rats had not appeared--I went back to the bike and rode back through the dry woods, turning west as I came out to take the more western trail back to the house.  That involves an interesting dive into an old ditch and cow path, then up into the near meadow and along the north horse lot fence back to the gate into the barn lots and house yard. 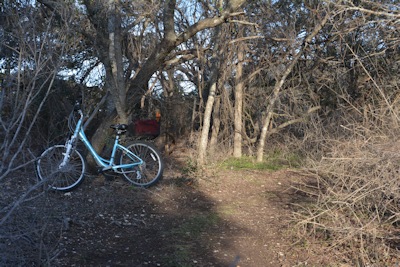 The trail from the view corner back through the dry woods curves sharp right here--though it doesn't look like it, that elbow bush has been pruned back--then twists, turns, and heads sort of south up to Fox Pavilion (which is on a rise) then down, across the berm, sharp left onto Cactus Flat, sharp right again,and various turns through the lower dry woods out into the south grass.  Now that the branches aren't grabbing my legs or the wheels, or scratching arms or helmet, it's a lot of fun to ride.
Tags: 80 acres, trail
Subscribe