Of Gauge and Absence and Hoping Socks Fit

Sometimes we shoot ourselves in both feet but don't feel the pain until most of the way through the race.   And so it has been with the current pair of socks, just off the needles today.  They look innocent, don't they, laid on a picnic table bench for display? 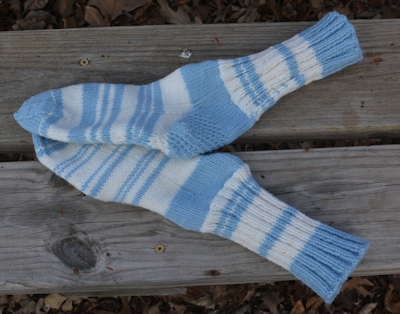 Just a simple pair of light-blue and white striped socks, simple construction, nothing to 'em.  But behind these socks are a series of assumptions about what the yarn would do, and I could do, given the circumstances involved in making the socks--which I set up for myself.

I made  these socks for a friend who lives over a thousand miles away.  Which means I have never had her feet to measure, or measure with.  At least when I made socks for my friend who lives part of the year in New Zealand, she was only fifty miles away and we saw each other at choir practice and on Sundays.   So, right off the bat, I depended on my distant friend to understand my request for certain measurements.

Second, I made these socks of very old yarn, a stiffish blend of Orlon and wool originally misnamed "Fabulend".  They are striped., with yarns which I assumed (yes, I know)  would handle the same and knit the same.  Same brand, same weight, same content--surely they'd knit just the same, right?  (Bitter laugh here.)

I had a full or mostly full skein of the white, and a partial skein of the blue.  Hence, not enough of either to make a pair ot socks.  Hence, stripes.  I felt very clever at that point.   It "felt" like altogether there was enough weight of yarn for two socks.  No, I don't have a scale that would have weighed to the right accuracy to find out, or even find out how much blue there was.  It "felt" like maybe 2/3 of the amount in the white skein.  Surely at least half.

I started one sock, then realized it would be better to work them in parallel.  So...without measuring (too much yarn to measure it with one little ol' yardstick and the weather was cold and wet--no stretching it on the lawn outside), or getting a scale so I could weigh it, I decided to "guesstimate" while winding it from the swift what was half a skein and half the unknown amount of blue.  Yeah.  THAT was smart.  Not.   I had in mind a design with bold, matching stripes on the cuffs, with the blue used below the ribbing and for the heel, with thinner non-matching blue stripes on white for the foot, and a blue toe with a single white stripe...for the sock that used the smaller ball of blue...there sure wasn't much blue left when I finished. 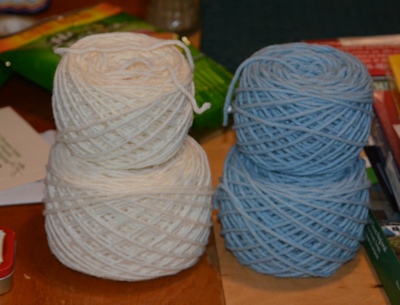 At least I'd made my friend a pair of socks with the same kind of yarn before (socks my mother had started.)  And I had measured the socks, making notes.  With sketches.  With numbers.  Notes I had been sure were complete.    Except they really weren't, something that became clearer and clearer as I neared the toe decreases. 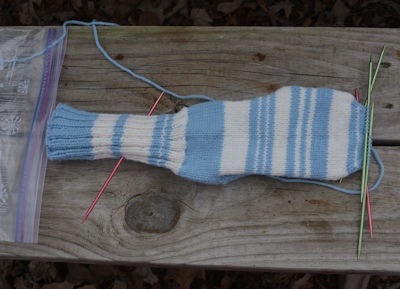 This picture shows some of the yarn's problems.  It's stiffish, it kinks, and it splits.  So the heel appears to have sucked in part of the width of the food.  I'm usually a very consistent knitter, easily keeping my gauge the same through a project.  But look again at the ribbed cuff (not the top--it was cast on a larger needle.) Notice that the blue stripes bulge out a little compared to the white.  Yup--my gauge on the blue is not the same as on the white.  Something I didn't figure into the pattern.  Compared to the wool socks I make, the socks are stiff (but hearty--boy, they do feel hearty!)

Where I wanted to reinforce the carrying of a color across another stripe to another of its own, by knitting one stitch with both yarns, the stiffness of the yarn pushed other stitches much farther away than normal, and there's a laddery vertical row in the back.  Not a problem I've had in striping the ribbed cuffs with wool yarn.

I consider the successful (if these fit my friend, which I won't know until she gets the package and tries them on)  completion of this project to be way more luck and stubbornness than intelligence and skill.  Just so you know.
Tags: knitting, socks
Subscribe