Some people have commented on the beauty of the previous post's snake.  Personally, I think that snake is not beautiful (beauty is in the eye of the beholder, remember?)   But to satisfy those who might think I consider snakes ugly in general (I don't) or all venomous snakes ugly (I don't)  here are some pictures of snakes--or links to those pictures, where I have not photographed the snake myself--that I think are beautiful.   Behind the cut, so those who are seriously snake-averse can avoid them.


One of my personal favorites is the red-lined ribbon snake, Thamnopsis proximus rubrilineatus.   It's a small snake that likes to be near water--creeks, ponds, etc.  This picture is from our lily pond: 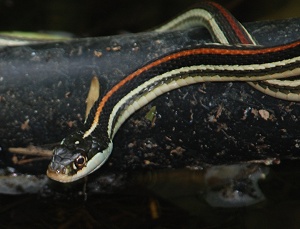 Another Texas  beauty is the speckled racer (doesn't live near me now--saw it as a kid once); it's a bigger snake with dark scales that have a golden center to each one.  Sometimes they look bluish or greenish because of a blue base under the black.  This link is to a "field herp" site with several pictures:  http://tinyurl.com/ps5y7by

The western coachwhip (which we do have on the place) is even longer, but hard to photograph because it's so long and so very fast.  Here's a picture of the head of one.  Here the scales look whitish on the edges, but in many lights they seem to be lit from within--they're the same taupe as on top of hte heat, but the edges "glos (look at the scales of the snout--that little "glow" is what you see on all the scales of the snake in good light.  Also note the round iris in both the red-lined ribbon snake and the coachwhip--they're non-venomous snakes and in the US, that's a reliable sign you don't have a pit viper.   The coachwhips are elegant and very fast, including climbing in brush. 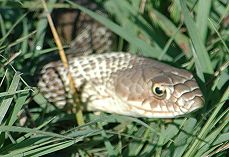 Another beautiful local snake is the rough green snake:  small, arboreal, usually spotted up in a bush or tree, though because of its color it's often called a "grass snake."    This picture is taken of an "eye level" snake up a vine (green briar) in the woods. 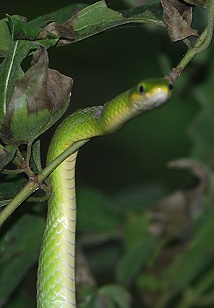 It's a shiny bright green, shading from a little darker on top to more yellow--then the yellow on the lower side, and white belly scales.

We "should" have coral snakes on our land--we have the right habitat for the local kind--but I haven't seen one.  So here's a link to  a lot more about these beautifully colored snakes than I knew before: http://www.reptilesmagazine.com/Snakes/Wild-Snakes/Coral-Snakes/

My snake pictures (which include most of our identified snakes, including a big black-and-gold Texas rat snake) are scattered amongst all the other nature pictures and I should collect them all in one file.  But I haven't done that yet.

Non-native to US beautiful snakes include (are not limited to) the reticulated python (http://www.reptilediscovery.com/retic.html), king cobra (http://www.arkive.org/king-cobra/ophiophagus-hannah/)--note that the pupils of its eyes are round, not slitted--it's only here that round pupils are a guarantee of non-venomous.   And because there are too many beautiful snakes and it's time to fix dinner, here's a link for several at once: http://scribol.com/environment/10-most-beautiful-snakes-on-earth/12
I really don't think the western diamondback qualifies in the "beautiful snake" contest.  But again: "eye of the beholder."