Yesterday, actually.  I thought I'd finish these last week, but didn't until Sunday afternoon, when I purse-stringed the toes, sewed in loose ends, etc. 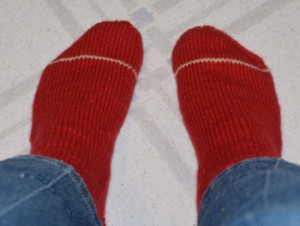 These socks were cast on early Sunday morning at KeyCon in Winnipeg, but had only some of the cuff worked when I got home--the other red pair, started before the trip, was finished on the train an hour or so before it reached the station. 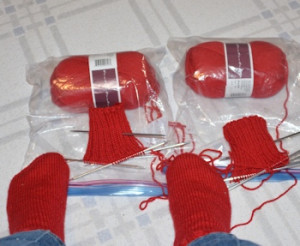 This is what the two pairs looked like by the time I got home.

Why, you may wonder (or not 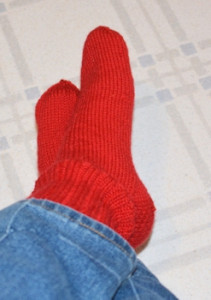 This is the first of the two pairs...they're less than a month apart in age, with these having been worn only a few times--not enough to "show" when I'm washing them.  Despite the apparent difference in color (it's a difference in lighting) they were made with the same yarn, same dye lot.  And I did not want to confuse the pairs.  So the second has a stripe.  Since I have an overage of red yarn (all the same manufacturer, same color number, and more of them the same dye lot)  I will be knitting quite a few red socks, and decided to mark the pairs with a toe stripe--each pair will have a different color toe stripe and if I run out of colors I'll start making two-row stripes, not one-row stripes for the second round.  The older red socks show enough wear that I can tell them from the new ones.

And why does that matter?   Because I'm tracking durability of the various yarns and reinforcement stitches pair by pair, and if the pairs get scrambled, then the data aren't good.

And now I'm onto the second sock of the yellow-striped shorty pair, with the heel turned.  The first sock is almost to the toe decreases, but I'm going to catch up with sock #2 so I can finish them at the same time.  The shadow near the wingl needle on the sock to the right is caused by the bulge of the turned heel. 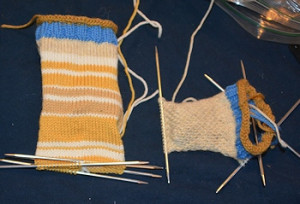