Life in a Wet Year

It's not wet now--things are drying up rapidly--but the frequent soaking (and sometimes flooding) rains have really made a difference to our summer after five years of stark drought.  The creek is running.   Fish fry are back--tiny almost glass-transparent minnows a half inch to an inch and a half long are swimming happily in the shallows.  Dragonflies I haven't seen for years (the American Rubyspot damselfly, the Great Pondhawk) are back down at the creekside.  Scat reveals that the fox and coyote are eating meat and bones again, not just cactus fruit, berries, and someone's dogfood.  We lost a lot of mature and very young trees, but some of our prairie transplants (root divisions from grasses saved from construction sites)  hung on and are taking advantage of the moisture. 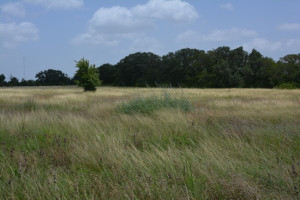 That green clump right in the middle of the picture is big bluestem, Andropogon gerardii, one of the four dominant tallgrasses of the southern tallgrass prairie (switchgrass, Indiangrass, and Eastern gama are the others) and that clump was only about six inches across when planted.  It's started putting up its flowering stalks (not flowering yet; the stalks go up first.)  This is the one I worried most about, and...it survived and now it's spreading.

Robber flies aren't the prettiest of insects, but they're large and they're interesting.  They usually look "bearded", like this one.  Somewhere I have a shot of a robber fly that caught a smallish dragonfly.  I think I have a shot somewhere of a large dragonfly with a robber fly, but I don't remember for certain. 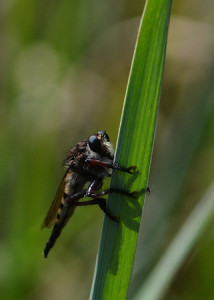 This fellow landed on a tall stalk of grass right beside me...so I took its picture.

Prettier are the odonates, and here's a lovely one: 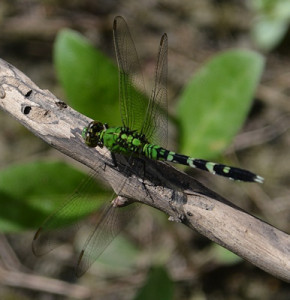 Again, this one cooperated by landing within a few feet of me and holding still.  Below are some whirligig beetles. 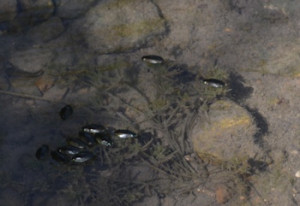 They may not look impressive, but they form rafts (about half the raft is shown here) on the surface of slowly moving water and whirl around madly within it.  They're very shiny, so the "white dots" I saw at first turned out to be just reflection.  A couple of them on the left have dived to the bottom (only a few inches deep here.)   This is the first photograph I've gotten of the whirligig beetles, so it's a new record for us.

I may add more pictures later as I get them cropped & resized.  (July 7: as per request, some flowers shown below) 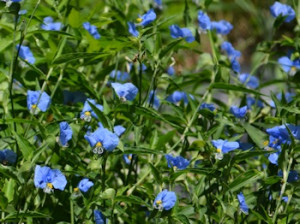 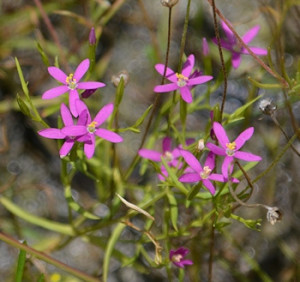 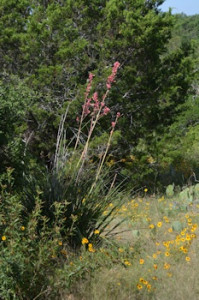 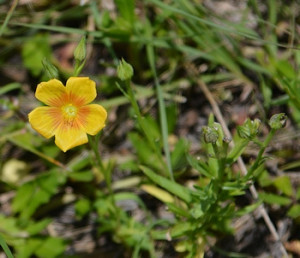 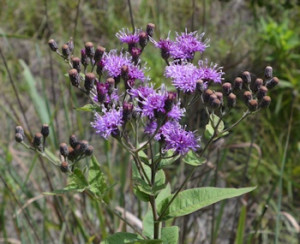