My mother liked soft mid-green (either warm or cool-tone), dark green, rose, and burgundy together; the living room carpet was rose, the drapes burgundy (with white sheers that quickly became cream with age between them), walls painted an interesting cream (I got to watch the painter mix the paint),  sectional sofa upholstery in a mid-green with slip-covers in summer (that my mother made herself) out of a slightly lighter green with pattern elements of rose, burgundy, and cream.  I didn't have any burgundy yarn, but as I was looking at a full skein of Bernat Sesame in "Bottle Green" (from my mother's stash, yarn at least 50 years old)  I thought at once of making  a pair of socks in "her" colors. 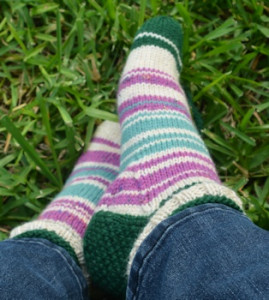 The "frame" (back and front) of the socks are the old yarn; the rose-purple with flecks of other colors is Plymouth Yarns Galway Nep (discontinued, drat it--it's a good heavy sock yarn and a great striping yarn.  The lighter green and the light beige/cream background are both Cascade 220; both were bought for use in striping colors I already had.   The ecru/cream/pale beige softens the other colors and mutes the whole sock--white would have made the colors more vivid.  The lighter green looks bluer here than it does to me in most lights, but that's emphasized by the warm-tone background neutral (instead of white) and the warm tone of the dark green.  These were cast on July 1, 2015, and came off the needles this morning, July 9, 2015.  I think that may be the fastest I've ever knit a pair of shorties.

Although my mother would have liked these colors, she would not, I think, ever have made a pair of socks with non-matching stripes.  I like playing with the variable and non-matching stripes on sock feet, even though that means more yarn ends to weave in.  These are just off the needles, the insides still furry with unwoven ends (worn just long enough to take the pictures--they're already off my feet.) 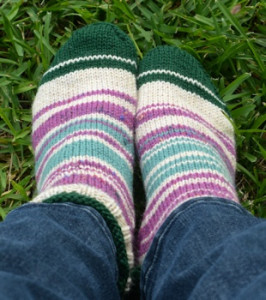 If I'd had a good burgundy yarn available for a few stripes, that would have livened the sock feet...but I like them as they are.

This is the 12th pair of short summer socks I've knit overall  (7 by the end of last year, 5 so far this year with a goal of 7 to give me a two-week rotation.)    Now to finish these by weaving in ends.  And cast on another pair.  After I do the stuff that was pushed back to let me finish these.
Tags: knitting, socks
Subscribe