Bread Pudding For the First Time

...it will not be the last.   I had never made bread pudding before, and don't think I'd ever eaten it, but after seeing some on TV cooking shows, and hearing about it.... 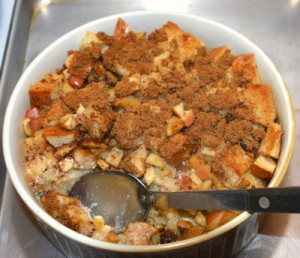 I could not get a picture taken before the spoon went in.   This is bread pudding with diced Honeycrisp apple in it (about 5/8 of the apple, something over a cup of the diced apple, went in.
I looked at several recipes online.  The one for apple bread pudding needed 10 cups of cubed bread; I didn't have that much.  Two of them needed 6 cups of cubed bread; I had too much.   The big recipe used 4 eggs, and the small one 2 eggs.  So for the various amounts I kind of...felt my way.

The bread was almost half a loaf of supermarket bakery's "Country French" (a round-loafed bread we like a lot for sandwiches and toast)--it had gone a little hard on the outside because we'd been eating Thanksgiving leftovers.  I left the crust on when I cut it up.   Some cubes had crust on one side; some didn't.

I'd heard/read/been told that bread pudding was simple.   I've been told that about things that weren't, too.  But this...yes, once the prep was done--slicing the bread, dicing the apples--the rest was simple.  Butter the casserole.  Melt the butter in the milk as the milk warms, put that in a bowl, add the sugar and stir, let it cool a bit while dicing the apple and then lightly beating the three eggs in another bowl.  Then all the liquids together, all the bread cubes and apple dice-bits into the casserole and pour the liquids over...push down into the liquid (and let it rise again.)  Brown sugar on top, into the oven, wait.  And wait.  (Our oven is not the fastest oven in the world.)   The smell...and then the flavor and texture and...I will be making this again.
Tags: bread pudding, cooking, dessert
Subscribe