The latest pair is now on my feet:  plain turquoise socks, the usual pattern, nothing fancy. 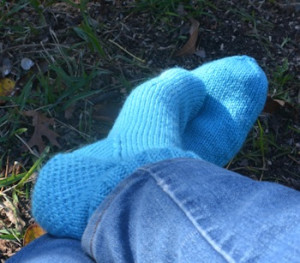 This is not the best pair of socks I've made, but it's also far from the worst, and my feet have now been happy in it for hours, so it's a WIN.
It's the ninth pair of full-size (taller cuff) socks I've completed this year (two pair were started in 2014), and the sixth pair of full-size started/finished for myself this year.  Sometime this week I should finish the second pair for a friend.   There are seven "sporty shorty" pairs for the year, too.   The next pair for myself is on the needles, just cast on today.  Recently three old-faithfuls gave out (Blue One, Purple One, and Red Two.  Green One is the only first-year sock still wearable...well, Red Two doesn't have an actual broken thread, but while washing it today I saw that one more wearing would probably make several large holes.  Red Two is older than Purple One (it was the 4th pair made, June 2012.  Purple One was the 9th pair made, early in 2013,  and it failed in an unusual place--the very front of the sock in the cast-on row.)

I'll be pushing on socks again this coming year.  Another seven pairs of the shorties, and if possible another seven of the regular socks.  I need to get to the point where all the socks have enough lifespan that I can do fewer pairs/year (and thus have time to play with knee socks, fancy colorwork, cables, etc.
Tags: knitting, socks
Subscribe