The Colors of Oaks

European Oaks, I've been told, do not change color in the fall and winter.   Some North American oaks develop brilliant color, and among these are several species of oak that grow in central Texas.   They change late--later now than fifteen years ago, pushing the ones in our yard to late November and early December, instead of early -mid November.  Years back, the oak leaves might have blown off by Thanksgiving; now they're just starting to turn then.  But this year, this week, they've been developing color.

What makes oaks very different from other deciduous trees in terms of the effect is their leathery-shiny surface, and the variability--even on one tree--in the way the leaves turn.  Sunlight glints off the leaves as well as penetrating them, so the tree sparkles and shimmers with color (very unlike the fiery glow of a sugar maple in New England, which has broader, thinner, and matte leaves, not glossy at all. 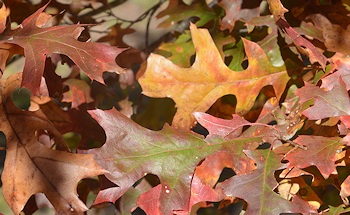 These were photographed with the sun behind me, showing the "shine" on the surface and the variatility of the leaf change.  These are all still on the tree--one branch of one tree.  This particular tree, when fully changed, ranges from a medium to a dark red with a few yellow and orange leaves.
Seen from behind, with the sun coming through, there's another effect: 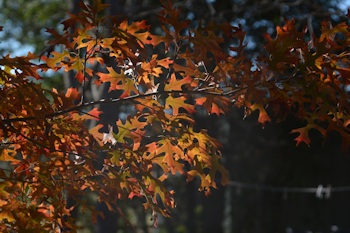 same tree as above 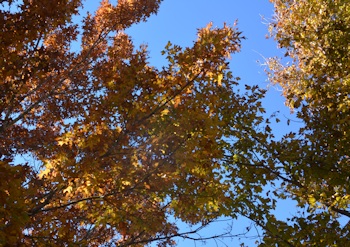 This red oak is almost touching a Caddo Maple on the right; this oak develops oranges and yellows and some light/medium reds; the maple develops a clear yellow following lime green (dark green summer foliage.)

The front yard largest red oak is the only one we bought (a gift from my mother.)   The other red oaks we have were planted as acorns dropped from trees we spotted out in the country--and then visited at the right time to pick up fresh acorns and plant them.    We've also planted bur oak acorns--bur oaks develop only a rich gold color (in some years no color)  but have the advantage of being disease and drought resistant.    They were once known as "prairie oak" and formed the famous "oak openings" that Native Americans and pioneers both liked to camp in.

Here are some trees "front-lit" by the sun in various colors. 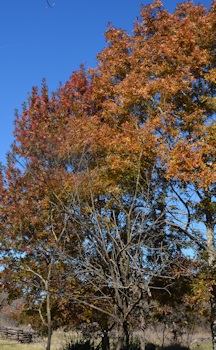 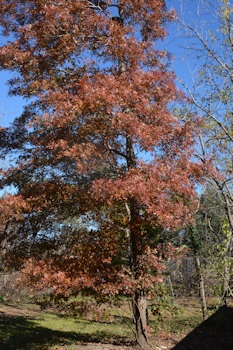 Orange-gold in front, red behind             A different mostly red, with still-green smaller one behind
These trees are stunning if you're standing under them or with the sun on the other side.

So if only people would quit tearing down "brush" and let the young oaks grow (or plant the acorns)  we'd have plenty of fall color around here.  Oaks grow slowly until they get their tap roots down into a moisture source (supplemental water for the first few summers really helps)  but most of these oaks are only 20-15 years old.   They don't show a lot of color as young trees, usually, but show more color every year as they reach maturity and start producing acorns.  This year we had a huge crop of acorns.