Not So Merry Socks

There's nothing visibly wrong with this sock: 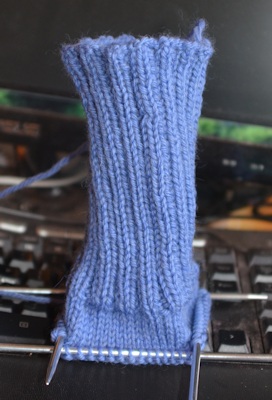 Yes, the ribs twist a little, and some of them are less straight than others, but otherwise...it fooled me into thinking everything was just as OK inside as outside.
But no....this sock has a hidden flaw that would soon caus it to fail and unravel....a flaw caused by my failure to ensure that the yarn I was knitting with came straight from the ball without taking any detours through (for instance) the gap between needles, in which yarn can in fact be trapped after being carried somewhere in a bag.  Which leads to starting to knit somewhere other than where the knitter left off last time.   And worse, a strand of yarn carried along without being incorporated in the knitting, making it vulnerable to injury and over-stretching.    Like this: 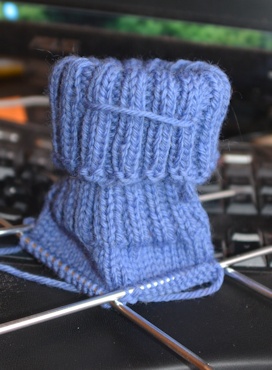 I found it when I put my foot through the part-sock to check whether I wanted to add an inch to the ribbing beyond its usual length (no, was the answer to that.  Five inches is still my favorite length) and caught a toe in the loop.  When I turned the top down, it was really obvious that had happened...a needle's worth of knitting skipped with the yarn "carried along" inside.   I'm still pondering how exactly to fix it, given my skills and the problem.  It could be solved by ripping out all the knitting back to that row, to where I didn't knit sixteen stitches, but that's a lot of ripping out, and yarn can react badly to that much undoing and then redoing.  Certainly I'd have yards and yards--about 40 yards, at a guess--of yarn to treat so that it would knit smoothly again (dampen it, wind it with just enough tension to straighten the kinks around something like a paper towel or toilet paper roll).  Or...I can cut it, attach a longer length of yarn to each end, and weave the ends in and secure them.  (It's not long enough to weave in both ends as it is.)  That's going to be a bit tricky, too, because the yarn's under a little tension now and will tend to creep back through the stitch it was connected to.  But I prefer that to frogging/ripping back so many rows with yarn that I know fuzzes up when ripped, however carefully.

It's frustrating because I have had the problem before and caught it sooner, and I do try to be sure the yarn runs directly from the ball to the point where I'm knitting, with no detours...but I didn't try hard enough this time. It's also frustrating because I did notice the little "jink" in the rib that is connected to the strand behind, about two rows beyond it, but I did not investigate the cause--I thought it was just an inadvertent change in tension.

Advice to others--don't make this mistake; it's a pain to fix.   Background advice: haste makes waste.  I wanted to finish this pair by the end of the year, so I was knitting as fast as I can (which isn't that fast) AND knitting distracted (TV)  which is asking for trouble.

On the bright side...I managed to do my very first bit of "stranded knitting" (albeit not stranded colorwork)  with amazing ease.
Tags: knitting, mistakes, socks
Subscribe