Largely because I wanted to free the size 5 needles I'd used to start it,  I picked up a project begun...um...according to my Ravelry projects page, June 29, 2015, shortly after we were allowed back in the train station in Fort Worth after a "shots fired" incident.  (Nobody died; nobody injured.)   I started it because knitting is calming, and I'd finished a pair of socks so had some yarn and needles with me.   I've looked at it a few times but haven't gone farther.   I'd been wanting to learn to do fingerless mitts for some time, but socks were a priority, and still are, except that in this illness I've made mistakes that cost me a lot of itme.  So today, after working on the shorter of the two "Bitterroot Rainbow" socks, and remembering that some size 5 needles were in this, I shifted to size 4s (of which I have more)  and then, as it was going pretty well, went on.  Here's what it looked like when put aside last summer: 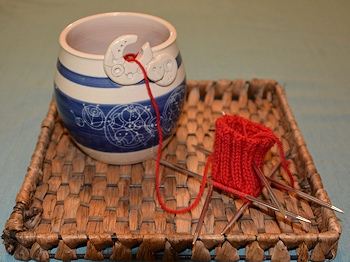 All it had then was the bit of ribbed cuff, and there it sat for months.  Well, not there, but in a plastic work-bag to keep it from the moths.

The thing about mitts or gloves is that it's a branched tube (or a tube with another orifice, to start with) and thus, for those who haven't tried it before and are not great at understanding knitting directions (that would be me) a bit of a topological challenge.  I read a lot of directions, stared repeatedly at the one remaining mitten from my mother's many knitted presents, and finally, today, between coughing fits, got this far: 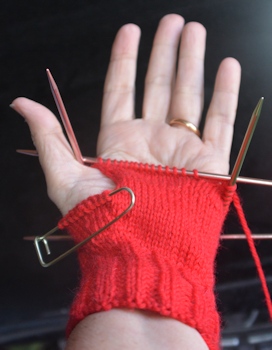 I realize now that I've made at least one technical mistake that's going to bite me...I added stitches at the top of the opening, to the sides would meet, and then knit two stitches together to join what had been the flat part rather than putting the stitches at the top on something I could knit off of.  I did remember to slip the first stitch of each row when I was knitting the flat part (where it goes up from the stitch holder below the thumb to the join at the top--it's knit one way, purled the other.)  I also may have added too many stitches (now on the stitch holder)  but I was feeling my way along.  (Was I following a pattern?  Are you kidding?  I am in knitting, as in so many things, a "let see if I can make this work" person, and since knitting can't electrocute me, stab me (these needles are fairly blunt), blow me up, shoot me or anyone else, or poison me...I play in a sort of childlike state of discovery.  It's fun.  It's not efficient, but then knitting is something I enjoy.  It doesn't put food on the table.  It would've been nice if I'd remembered that increases, like decreases, can lean left and right, but...again...discoveries.  There's a bulgy bit on the back so far...but the straight needles are pulling the corners out.  It may calm down. Or not.

Next: I'll take it up to the top of my hand just past the big knuckles, and then see if I can get a half-thumb picked up and knitted in the hole there.   The second one will be cast on with size 4 needles to start with (or moved to 4s after I do the ribbing--I really don't like tight ribbing)  and what I learn from the first will be used on the second.

On the funny side (sortakinda)  I am still short 4 size 5 DPNs.  That suggests they're in a project somewhere.   Because I had (I'm almost-for-certain-sure) 30 of them, enough to have three pairs of socks going at once (and had had that, in fact)  and 4 missing would be the four standing needles in something being knitted in the round.  But what ELSE could I have been knitting?  All my needles had been committed to socks for several years.  And I had the needles off the pair I'd finished up a few hours before...some of which I used for this, and some of which I put somewhere in my luggage.  Surely, they'd have been in the Ziplock that the sock-in-progress had been in.  And I would've pulled them out of that and put them in my big "stays at home usually" needle bag.  Wouldn't I?  Apparently I didn't, and put them somewhere else.
Tags: knitting
Subscribe