Images taken about noon today, February 29, of the "Bitterroot" socks still in progress. 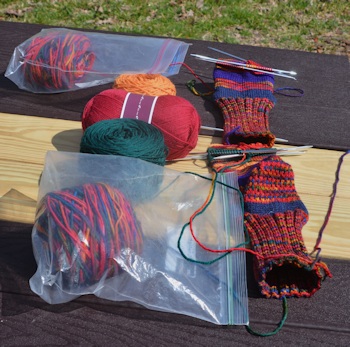 Yarns were named in the previous post.
Yarn colors do not always photograph the way they look in real life, so some of these have been tinkered with in the photo software.  They are now *closer* to how I see them.    In the first image, above, the lower sock (nearer) has the heel side up and the heel sticking up hides most of the foot; the upper sock has the heel side down.  The first stripe on each sock, at the ankle, is navy blue; the next is royal purple.

Here's a closeup of the heel detail , including turn, of the longer sock. 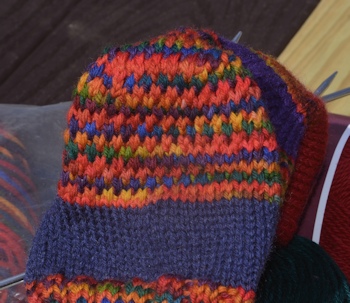 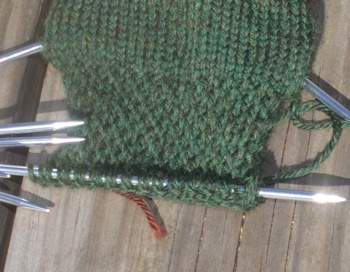 Here's a better picture of the sock foot design as it's nearing completion. 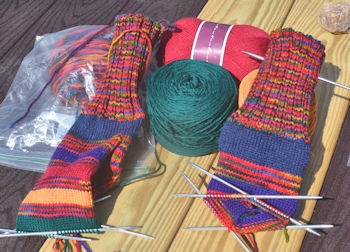 The left sock is almost to the transition back to the MC yarn for the toe, after another one or two more rows of the dark green.  It's attached to both the its own multi-colored yarn and the green yarn (center, above) The right sock has only its purple stripe and the multi stripe beyond that.  It's presently attached only to its ball of the multi-colored yarn, but is about to start its red stripe.  I'm saving yarn (and weaving in of ends) but continug the mutli-yarn up the stripes, knitting the two yarns together every second or third row.   I will hold the left sock at the point of starting toe decreases, and take the left one to the same level.  I'd like to finish this pair by my birthday, a week from today, as a present to myself.  (There are a lot of ends to weave in.)
Tags: knitting, socks
Subscribe