When in Doubt, Knit

Or try to.   This pair of socks and I had some problems, when I got sick and kept knitting off and on while in bed.  Usually this produces a reasonable amount of knitting.  This time it produced an unreasonable number of mistakes which had to be undone, fixed, or worked around.  However, they're done, and here they are: 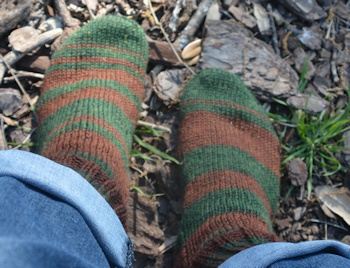 This is the 51st pair I've completed,  but the 50th to be started (the Birthday Socks overtook these for reasons partly related to color and partly related to how fast my birthday was approaching.)   It turns out that when I'm sick and having paroxysms of coughing--can't get my breath, sort of like whooping cough--I don't knit as well or as fast as usual.   These socks aren't really dark (as you can see--not a dark brown or a dark green)  but I still had problems seeing stitches well enough to avoid mistakes, or correct them when I made them.  And I was so, so, SO tired of not getting enough oxygen.  And--soothing as brown and green can be--they can also be a little depressing when you're stuck in bed and can't go find a chair where the light is better.

So I switched to the birthday socks.  (Shown almost finished, with one inside out to show the yarn tails waiting to be woven in. 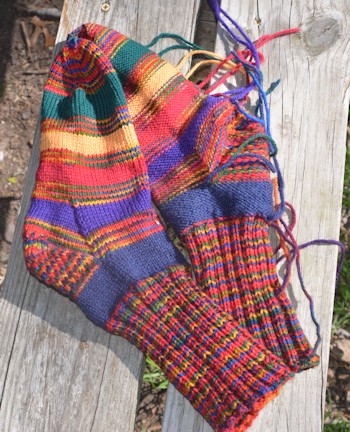 And yes, they cheered me up, even when sick, and I could see the stitches except in that navy blue stripe.

But back to the "Woodsy" socks.  As usual with striped taller socks, I made the ribbed cuffs match, but did not try to match the stripes on the feet.   I used both wider and narrower stripes on one, and medium-wide stripes of similar widths on the other, just to see which I liked with colors similar in light/dark and saturation. 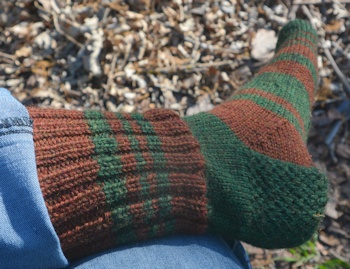 The left sock showing the ribbing stripes, the variable stripes on the foot, and the "frame" (heel and toe.)  One of the mistakes I made and did not redo on this sock was failure to decrease on every needle between the ribbing and the stockinette at the ankle--which is why there's a visible bit of extra material there. It doesn't bother me, though I usually snug in 4 stitches (one per needle) at that point and had decreased only 2. 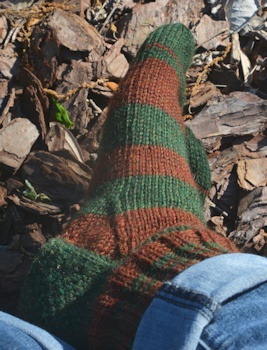 On the right foot, the striped on the foot are closer to the same width, which looks "quieter," not so busy.  Note the toe stripe of brown on the green toe--all my striped socks have a single row of a contrasting color just for decoration.   Plain socks may have a contrasting toe stripe if there are enough pairs of the same yarn made close together that I might mix the pairs (which would screw up the rotation of socks, intended to even out the wear.)

The yarns in this pair are Ella rae Classic (the brown heather) #178 and Cascade 220 (the green heather) #2446.   Both are obviously "warm-toned," with highlights of gold in both the brown and green, and orange/red in the brown.   The Cascade 220 yarn tails in the ribbed area really fuzzed and fluffed up as I worked on the socks, much more than other yarns I've used.  Yes, I try on the socks repeatedly during the toe-fitting stage, but was remarkable fuzzing, and made it harder to weave in the yarn tails.

All my "regular" socks are simple crew-sock designs, with five inches of ribbing at the top, an inch and a half of stockinette between the ribbing and the top of the heel flap.  The heel flap is worked in Eye of Partridge stitch, with this reinforcement continued through the heel flap and onto the start of the gusset decreases as a pad for my heel.   Socks are shaped to my individual feet, decreasing in circumference from 60 stitches in the ribbing to 56 in the ankle--and the gussets bring it down to 54, with another decrease at mid-foot (the bump on the top of my foot) to 52 stitches, a decrease of over an inch.  Toe decreases start on the outside of the foot, at the top of the little toe (L and R shaping is slightly different, because the feet are.)   This allows me to purse-string the toe, with the "point" of the toe right over my longest toe on each foot, giving toes plenty of room without bagginess.  The easy fit of the ribbed part prevents any compromise of circulation (and thus my feet don't swell up.)

I plan to knit 7 pairs of this type of sock in 2016, 7 pairs of short summer socks, and 1-2 extras  is possible.  Next in line is a pair of royal blue socks (one cast on and with six rows of ribbing on it, and the other one cast on and then frogged when I realized that...yes...I had twisted the yarn on a needle before joining.   I tried to do the join up with just the light of the bedside lamp, but clearly that's not good enough.  So when I've seen Cygnus head for the ISS, I'll go get that cast on and a stablizing row or two knit.
Tags: knitting, socks
Subscribe