Breathe In, Spring Is Here 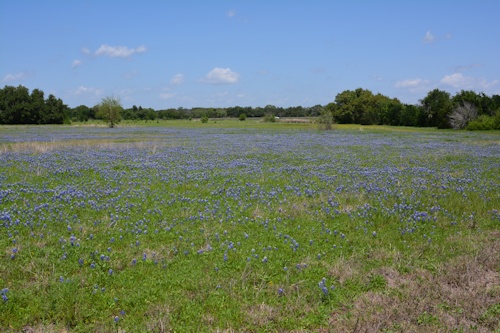 Warm day (high 80sF) and breezy--the fragrance rolls over you in waves
Bluebonnets have a lush, rich perfume that makes me want to breathe in forever.
Some of the bluebonnets are past peak (peaked last week) and some are at peak now: 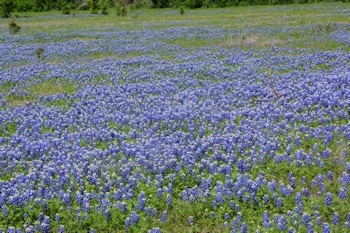 Soil depth & content affects speed of going to seed as does exact timing and amount of rainfall through the growing season.  In drought years they're only 2-3 inches tall with small flowers, and notas dense, but they will still seed. 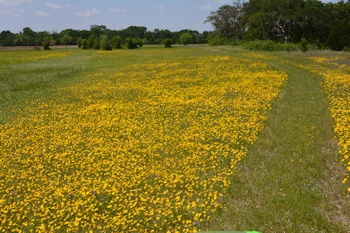 Carpet of Gold--Goldthread, one of many yellow spring flowers
Mowed path keeps walkers from surprising rattlesnakes.
Goldthread is growing on a gentle slope from solid rock (on R) where
it's scattered, to slightly deeper soil on left down to a seepy area that's too
wet for it some years.  In other years it will fill that hollow, to get enough moisture. 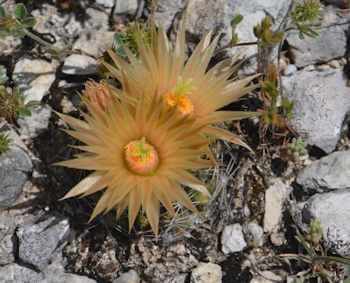 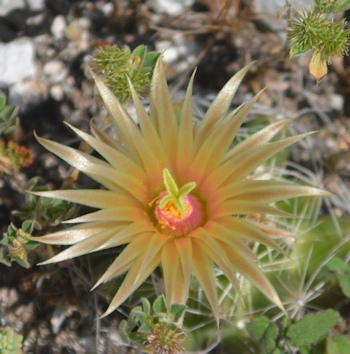 Tiny ball-shaped cactuses with flowers wider than the cactus.  These are growing on thin soil (<1 inch) and decomposing rock or solid rock.  They will also grow on well-drained soil that's deeper; there's a cluster that sometimes produces a dozen of these flowers at once.  They're uncommon around here, and sometimes disappear from a site where they've bloomed for several years and then (sometimes) return.) 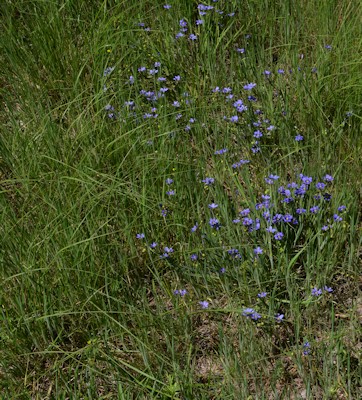 Blue-eyed Grass, an iris relative, a different blue than bluebonnets.
Centers are yellow (making the name odd) but "charming."  There's another
native grassland iris I'd love to have, but it prefers wetter situations  and isn't here. 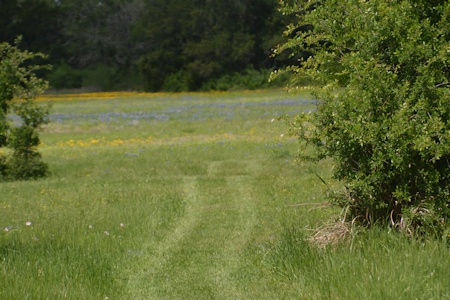 Stripes of color reveal contour, soil variations, and timing of fall/winter mowing
It was a great day to be out, with the warm air moving the various fragrances around.  This isn't all the wildflowers that were out, either--some only in small clumps (the brilliant white "bouquets" of Blackfoot Daisy, the delicate pinks and lavenders of Drummond Wild Onion, the Pink Evening Primroses, others) but time ran out, and I still haven't run all of them through my photo processing software.  I was distracted, in part, by this:

In the creek, which is falling now, and this end heavily involved with algae, so the water is not as clear as it has been.  My best guess so far is a species of Percina, a logperch.  If it's a logperch, it's an adult (or almost adult--it's adult size at about 4-5 inches) but if it's not a logperch, it could be a juvenile of something else.  Investigation is ongoing.   It's fast and wary--I suspect herons have been down there hunting fish.
Tags: fish, spring, wildflowers
Subscribe