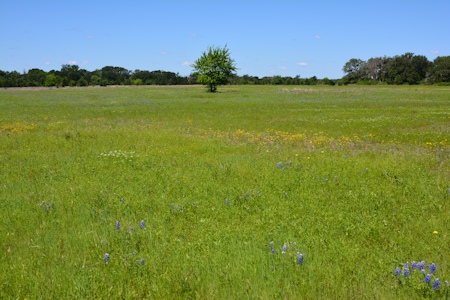 Earth Day 2016
It had rained in the day before, and dawned cool, with a northeast breeze--a perfect day to go checking the water quality on the east half of the place.  Not as much rain as the previous weekend, so with some difficulty I was able to make it from place to place in ordinary walking shoes.  In the distance, the line of woods along the seasonal creek; to the left the "dry woods" growing on a hump of rock.  Out of sight to the left, the line of trees along an old ditch dug by a former farmer, intended to carry runoff from the highway to the south property line .   A beautiful day, with signs of recovery from the drought...and signs of much management still needed.
I have no equivalent pictures of what the place looked like 30-odd years ago when we moved to this town.   We didn't have a digital camera, and we didn't own the 80 acres.  It was then under the management of a decent-enough farmer who leased it and ran some cattle on it--but with care.  I had permission to ride my horse out on it, and did so.  It was slightly overgrazed, and the farmer disked and planted "improved" pasture grasses in one area, sometimes mixed with red-top.   Up at the highway end, the owner sold a corner to someone who wanted to build an auto-repair place.   Later, a construction firm moved in, and wanted more land; the owner sold it, making significant notch on that end.   The farmer who'd been leasing it grew older, died, and both his place (adjoining this, west of our 3 acres) and this were leased to a man who ran as many cattle on it as he could.  Grass diminished.  Ashe juniper invaded; he didn't clear it off; there were hundreds, both east and west of the dry woods.  The two gates by which cattle left this field had deep gouges in hardpacked dirt (or deep mud, when it rained) and erosion occurred even in a two inch rain.

In 2000, when we had the chance to buy it,  grass had been eaten down to the dirt; some areas had less than 5% vegetative coverage;  very little had thick native grass,  the junipers were 3-5 feet tall, closing in.   Land purchases take time;  we got permission to start clearing the Ashe juniper that winter, and took possession in early 2001, insisting that the cattle be moved off.  Fences were all bad.   Broomweed, thistles, compaction in some areas from the number of cattle, serious erosion in multiple sites, especially the creek flood overflow channels.  But we had seen that native plants were there--here and there, in little groups.  The old, tough prairie grasses: switchgrass, little bluestem, Indiangrass, and more.  The native forbs, too: Maximilian sunflower, frostweed, basketflower, the common wildflowers people plant (bluebonnets, rudbeckia, gaillardia, prairie verbena) and the ones they don't: Brazoria, Texas sage, gaura and false gaura and more.

So the work began.  Water management--to prevent erosion, to hold rainfall and runoff on the land longer, so it can soak in and maintain soil moisture and replenish groundwater, to allow revegetation to take hold and provide protection both from intense rain and from moving water--was the first priority.  And this--smaller then, and built against the old fence you can see lurking behind the new one was the first, rocks laid across the old gate between our place the the one to the south: 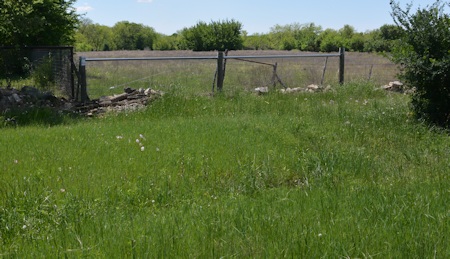 Old #1 Gabion
The original was built with rocks--smallish rocks--we picked up on the place (enough soil had washed away that picking up small rocks was easy)  wrapped in old chicken wire.  It took garden-carts full of little rocks.   We couldn't afford to buy rock at that time.  Now it's reinforced by larger, heavier rocks, but even in its early stages it slowed water down some and kept some of the soil on our side.    Periodically a big flash flood shifts things, and it needs repair (it needed repair last year, when we had twice the annual rainfall after years of drought, so the soil-holding capacity of roots had been degraded.   Except in the heaviest rains, water runs clear when it leaves our place even though dirty water enters from the highway along the east end and from the construction yard.

The second gabion was built on the other gate cattle had used, where the soil loss was even greater.   The third was built upstream of this one, across the "scour" where water from the old ditch and natural drainage from above converged to flood this meadow.  It is now the main protector of the meadow, holding back a large pool after big rain events, and releasing it slowly across the meadow. 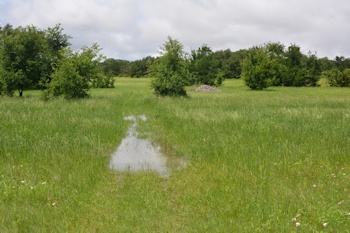 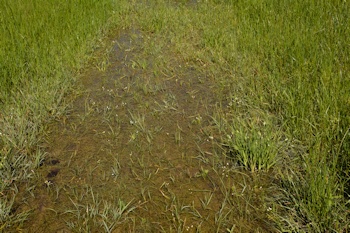 4-18-16: after very heavy rain, water flows almost clear; after another smaller rain that week, on 4-22-16 it's flowing completely clear.    Instead of digging a trench on old cattle trails, the flow is now wide, shallow, and much slower.  Native grasses and forbs now fill this drainage.

Here's the back side of the #3 gabion with water and a lot more vegetation than it had when we started, when it was across a bare scoured place, and the water clarity in one of its associated upstream pools. 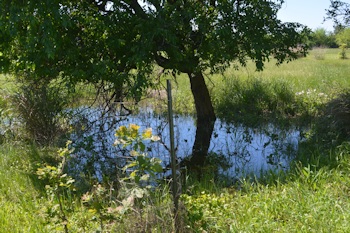 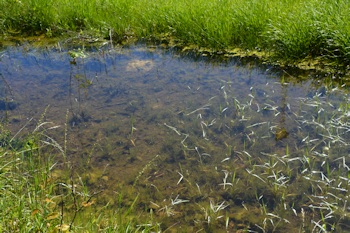 These pools provide habitat for aquatic life, such as crayfish (note burrow sign in R image), amphibians, odonate larvae, and others.  Crayfish did not survive the years' long drought but returned this winter after rain restored soil moisture.  These pools provide water for other wildlife much longer than the previous fast-moving and fast-disappearing runoff, and they have supported revegetation.  They are shallow, however, and thus subject to relatively fast evaporative loss, compared to deeper ones.   It would be ideal to dig out the main gabion pool (esp. at the low end) but we don't have the time or strength.   There are many other chores to do, from finishing the rebuilding of the north fence, rebuilding the east fence on the highway, maintaining checkdams after floods, mowing. maintaining the rain barns, pumps, and guzzlers that provide wildlife water when the natural features are dry,  replanting native vegetation (still ongoing),  and documenting what use wildlife is making of which parts of the place.


Here's a failure that must be dealt with this year: 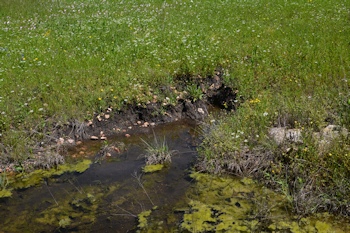 The city's new water supply comes from a lake to the north (wells failed, in the drought) and required some construction on a corner of the 80 acres.  Despite discussion with the project engineer, in the event the construction crew were not careful, created deep ruts from heavy equipment and a supposed "erosion preventive" fence that diverted water onto a more vulnerable area and this happened.  It's headward erosion from the side of a natural drainage channel.  Note the little clump of soil with grass in the midst of the water.   This is going to require a new, large, wide, checkdam joining the one (just out of sight to the right) that stopped headward erosion of is drainage channel initially.   Right now, we can't take the rocks out there, because the ground is so wet and we don't want to break what vegetation cover we have (and hauling rocks, even in a child-sized wagon, puts a lot of weight on tires.)  When it's a little dryer, I'll start picking up any rocks in the area by hand and get things started.   And when it's good and try, we'll try to get a truckload (5 cubic yards) of appropriately sized rocks somewhere back near the gate, so we can haul a cartload out every day or so.

Even with this problem, water quality coming off the east grass looks good shortly after storms, both in the old ditch and in the natural drainage. 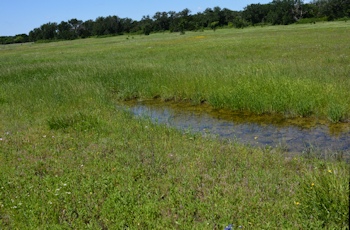 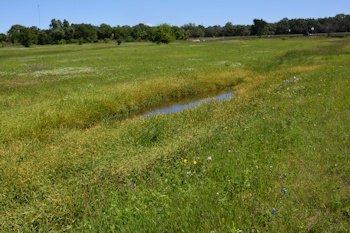 Left: natural drainage, series of shallow rock-bottomed pools, clear water.   Right: old ditch, once bare, now heavily vegetated, with both linear pools and water running through solid vegetative cover.  In distance of right image, dark line reveals the original natural drainage channel; these channels converge upstream of #3 gabion, where cattle had broken through the old ditch structure.   We built a large check-dam there, and smaller ones between the pools above the gabion itself...and then more checkdams upstream on the natural drainagin to slow drainage from a large seepy area.  These began holding soil quickly, and transplants of switchgrass where then successful--and now contribute to the filtration and soil holding.

On Earth Day, these small pools were being visited by both dragonflies and damselflies, including damselflies mating and ovipositing: 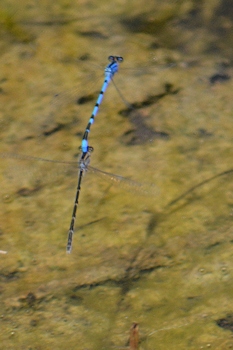 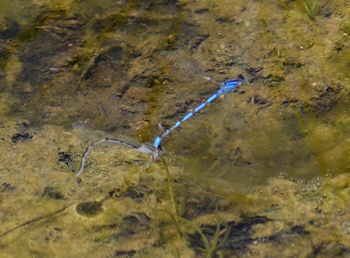 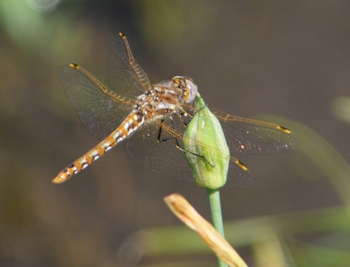 "Manage the water, and the land (and wildlife) will take care of itself."