The rain stopped a week ago; the winter grasses are brown or browning, the early wildflowers have gone to seed.  But soil moisture is still good. The tallgrasses (switchgrass, Eastern gama, Indiangrass, big bluestem) are doing very well (switchgrass in the secondary drainage is taller than we are.)   There's an area in the east grass we call "The Bowl" because it's a roundish area that seeps in wet weather as it slopes down to the old drainage line.  It stays green longer.  When we got the place, it was covered with broomweed (non-native), bare under the broomweed with a few scattered grass plants, not doing well because of the chemical defense of the broomweek.  Today it looks like this: 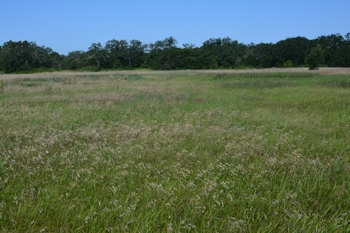 You can see the upslope edge (pale beige of dry grass)
Every different shade of green, every native plant, reveals something about the soil where it is.
I took that picture sitting on one of the little lawn tractors at the bottom end of the bowl, the much wetter end (just dry enough to drive on now.)  In the foreground are large flowering sedges mixed with meadow dropseed.  Under them are small flowers, such as meadow pink (Sabatia campestris) and coreopsis and prairie bluets (ranging from white to light lavender.) You can't really see the scattered taller Texas bluebell (actually a gentian, Eustoma exaltatum (prev. grandiflorum) in this image (there were two, but too far away to show.)  It was very bright, hot, and breezy, which made photographing individual flowers...tricky.

The lower end of the Bowl is now rimmed with switchgrass (mostly) and Eastern gama that we planted for erosion control (along with the checkdams. 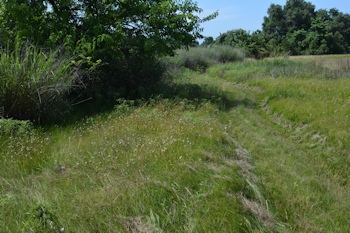 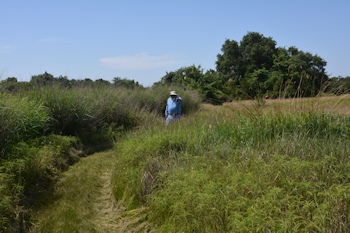 A mowed maintenance trail across low end of The Bowl; R-pic shows the SW corner of the bowl--see brown grass beyond; secondary drainage turns left at clump of trees.  We spooked a bird from the switchgrass that then perched in the tree to the L.  More on that later.

We have four gentian-family wildflowers in wet years like this, but I don't usually find three of the four in the same general area.  Sabatia campestis, the meadow pink, likes wet soil and is found only in wet years in the lower to mid-Bowl, peaking in late May.   Texas bluebells (not  bluebell, but since there aren't any real bluebells here, that's what pioneers called the gorgeous big gentian, Eustoma exultatum, was E. grandiflorum) likes areas that have been wet, or are moist, but I've seen it flowering in the worst soil in a dry August.  I was told by several "grandmother" age women, when we moved here, that these used to be so common that girls cut them to make wreaths for their hair and used them for table decoration.   And the tiny Centaureums (two species, one "clumpy" and one "straggly") grow on various thin, unpromising, well-drained and even dry soils when they feel like it, any time from late April into July.   But today I found all three in bloom in the Bowl in mid-June.  In fact, in one "corner" of the bowl, I found the wet-loving Sabatia within two feet of the dry-ground Centaury. 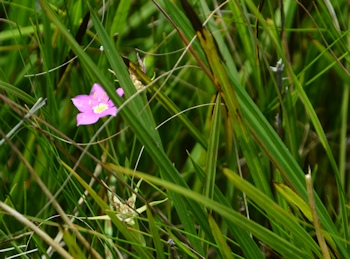 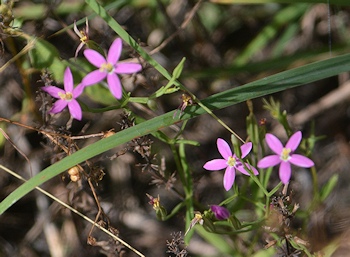 L: Meadow pink growing in among large sedges;  they grow scattered in grass, sedges, and young Maximilian sunflowers.
R: One of the Centaureums, the same pretty rose-pink as the meadow pink. 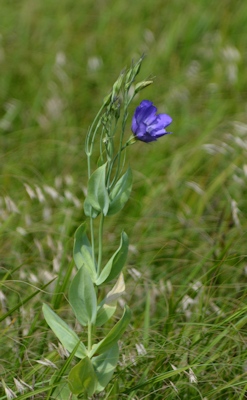 Eustoma exultatum varies in color, but always some shade of purple, often with white
Now about that bird.  I saw three birds fly out of the switchgrass as I drove past, two one way and one the other.   After I stopped the tractor and got off to take pictures, I began to hear what I thought was a dickcissel calling.  We have them only on wet years.  When my husband joined me, the bird flew from a different clump of switchgrass to the top of the little "bodark" (bois d'arc, Maclura pomifera) and there I was with camera in hand.  I mentioned quite breezy, right.  The top twigs of the tree were moving around some, and I was not in the best position (sun-wise) but I did have a zoom lens, my usual "out for a walk in the field) lens, so I did the best I could.  And when put in the computer, brought up to 1:1, and then run through a histogram adjustment, this showed up: 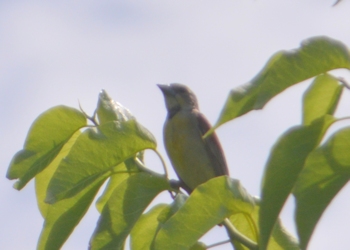 At full size in the computer, the black V collar, yellow in the front and cheek, confirm the ID
Male Dickcissel, and given the date, probably breeding here this year.
If you have any kind of photo-manipulation software, it's alway worthwhile to take catch pictures of birds and other wildlife, because about half the time I can get an ID even if it's a very imperfect picture in terms of bird photograph (as this is.)
Also tucked in under the sedges and grasses were other wildflowers than the gentian relatives:  small coreopsis (not sure of species), prairie bluets, "leftover" gaillardia stunted by too much water (!).  Toward the edges of the bowl, on the east, more and more leftover gaillardia and lemon horsemint.  Only one or two flowers were left on any gaillardia plant, but the lemon horsemint is still holding on well.

From the bottom of the Bowl, I turned up its east side, and from there followed the mowed track around the dry woods.  The seepage-watered "dry-woods swale" is now filled with Coreopsis instead of Goldthread.   But now I need to resize and crop more of the images I took this morning, so that part of the day will be in a different post.
Tags: 80 acres, birds, native plants, wildflowers
Subscribe