R- found a tall blooming plant Saturday, June 18, that he didn't recognize: a colony growing  in the creek woods, in the 'swamp' area, now very wet again.  There's a kind of "sandbar" (except it's not sand, but alluvial mix from flash floods including black clay)  that gets midday sun.  He found a colony of these, 4 feet and more tall, and pulled the shortest one to bring back and show me.  It was about four feet.  By the time it got back to the house, it was fairly limp, the main stalk actually broken.  I snipped it short enough to fit in a pitcher, hoping it would perk up.  Some of the pictures were taken shortly after that; over time it did regain turgor so this morning I set it outside for a bit and took more pictures. 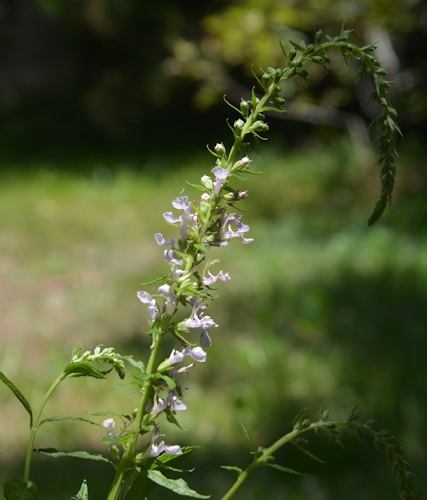 Clearly Mint Family--square stem, opposite leaves, flower shape.
Now IDed as Teucrium canadense
The color appears pink in some lights, lavender in others; this image was taken in late afternoon.

Here's some flower detail taken in the same session. 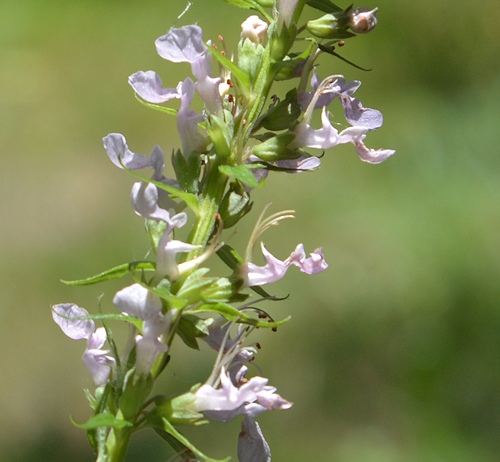 Key to ID: stamens protruding through cleft in tiny upper lip of flower.
I started looking for ID with my old Peterson Field Guide to Wildflowers of North-eastern and North-central North America, Ajilvsgi's Wildflowers of Texas (and could not find my Peterson for Texas & the Southwest, which I didn't put back on the shelf the last time I used it (DUh!)  I've found the Peterson useful even when it's not this region, as this is a transitional region.  Looking there, I was leaning toward Stachys tenuifolia.  It was getting late, but even so I pulled out the monster, Correll and Johnston's Manual of the Vascular Plants of Texas and looked at the various Stachys entries...S. tenuifolia was listed for east fourth of Texas, which we aren't, but I've found eastern plants in various nooks and crannies here, esp. in the creek woods. (American elm, for one.)

This morning the cut end in the pitcher had soaked up even more water, and twisted its spike round to point at the window of the back door.  Many of the flowers had dropped, but it looks like more may open further up the spike.  I set it outside on a stump and took some more pictures, first of the entire plant, then the flowers, then the leaves.  I measured the leaves on the original stem, now very limp, as well. 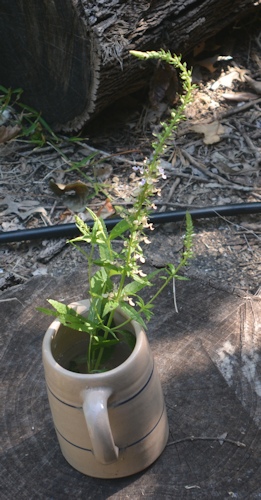 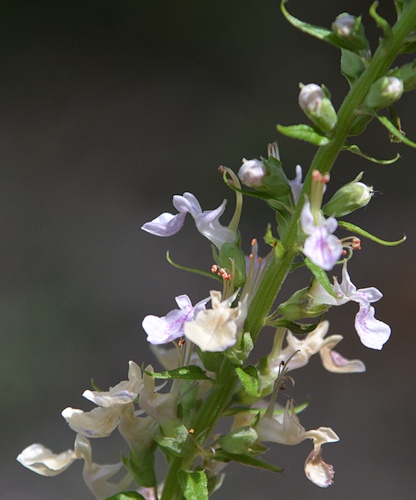 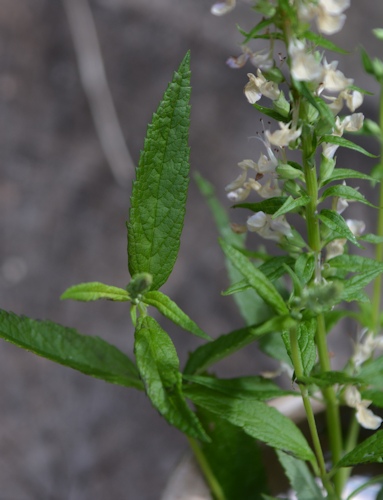 Leaves are lanceolate, toothed, slightly rough.  Down the stem they're 3.25 inches long plus a 0.5 inch petiole. One
leaf (lower right) clearly shows the petiole.
This morning, I tried to look up this and possibly related plants on the National Wildflower Research Center's database of plants.  There's not an easy way to do a side-by-side comparison of closely related species, and the information needed for working up an ID isn't always in the plant description (missing for many plants, including the tall ones like this, is height.  There's generally less information than in a field guide.)  Anyway, going to bed I'd been happily thinking S. tenuifolia, but the images at the Wildflower Center and the references they gave suggested that that plant had more brightly colored flowers, and more obvious on the stalk, than the one we have here.  So I went back to Correll & Johnston, but....uncertainty still there.

Need a solid ID to put this plant on the 80-Acres list.   And of course I'd like to know how close I came to the right ID.