This is a scattershot sort of post, because we had a wonderful Houseguest for 10 days (she's been gone over a week now, but the 10 days were memorable) who cooked, and then I cooked, and then we cooked, and  lot of cooking-type stuff happened.  She wanted to watch me make chili, and chicken stock, and apple bread pudding, and bean soup.  I wanted to learn more about Italian cooking, at which she is excellent (OMG her chicken piccata!  My mouth was dancing in the streets with glee!)  Then there was the after-cooking with the leftovers after she left.  The only picture I have of the whole cooking extravaganza is the bread pudding one she took. 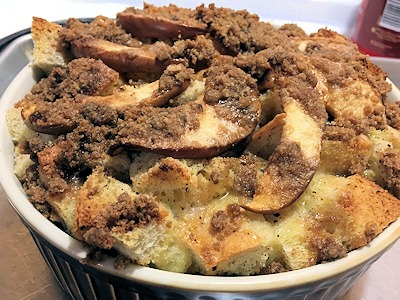 That's right before half of it disappeared
So:  She learned to tell when chili's done by the shift in color from orange-brown to brown-brown and the thickness (chili needs no thickener if you simmer it long enough.)   This chili included garlic from our back yard, which had helpfully turned ready to pull that week.  Chili is a meat dish.   I use onions and garlic and tomatoes in mine; some people are opposed to the tomatoes, but I like them as long as they have time to cook down and disappear into the thick stuff between the meat chunks.  Chili done well is not fast food.  It is not even medium food.  It is "get it on by 8 am and you can eat it at 6 pm."  Yes, that's ten hours.  Most of which time you're ignoring it and doing other things.  (It's not horrible at lunch, but it's not really chili yet--the liquid is way too thin, the color way too orange, the tomato pieces can still be distinguished, etc0.  This is the point at which people are tempted to do silly things like "thicken the broth" because it's not thick yet.  Nope.  Leave it alone.  Trust that moist heat will move more and more meat fibers into the broth and it will thicken by itself.   On a low fire, it won't stick to the pot or burn because it doesn't have beans in it.  All you have to do during the day is check it every hour so you can feel like you're being a cook, and put the top back on the pot.  Around 3-4 pm it's beginning to "turn" and from there it matures steadily and obviously.  Leave the top half off or completely off if you accidentally put too much liquid in to start with, and check it every half hour until it's nine hours in; from there give it a stir every 15 minutes.   If you cut the meat into small pieces (as I do) instead of using a coarse grind, the chunks should be spoon tender (press the side of a spoon against a chunk that's next to the pot side and it should immediately break.)   Range beef takes longer getting to that stage than supermarket beef.  Chili was a dish made with tough, lean beef--you won't get the flavor from prime.

Bean soup.  Since I don't put beans in chili (but keep reading, there's an exception) I make beans to have *with* chili if you want.  If you mix them into your bowl I won't make a face.   I like a mix of beans; not everyone does.  But pinto beans, traditional and tasty as they are, can be a bit "flat" (esp. after we started growing bean varieties and I started using a mix of what we grew.)   Now I buy a pound sack of each of  the easily-available beans, pour them all into a big pickle jar (BIG pickle jar) and stir them up.  I could stir them up first, but it's fun to pour them in the jar layer by layer until the first batch of soup--they're pretty.   Red beans, often two sizes.  White beans.  Black beans.  Pinto beans.  Anasazi beans.  Black beans.   4 cups of mixed beans soaked overnight in cold water and rinsed.  One very large, or two smaller onions, diced.   Bay leaf.   A garlic clove or several if you have them.  Ham bone or (even better) about a half pound of smoked ham hocks.   Water to cover, bring to boil, simmer until the black beans are tender all the way through (they cook the slowest.)  Add a little water if it gets too low.  The white beans will have melted into the pot likker by then.  That's fine.   The pot likker should be opaque, not translucent, when it's done, and medium-thick.

From bean soup comes bean dip.  Take a cup of two of the bean soup, mostly beans, and blend it (I put it in a narrow container and use a stick blender) until as smooth as you want it.  That thickens it enough.  You can go through a whole sack of corn chips with this homemade bean dip in nothing flat.   If you want a hot bean dip, toss in some diced jalapeno.  Not too much; the salt of corn chips will hurt if you burn your lips on the bean dip.

Or...if you happen to have, say, a cup of chili left, and two-three people to feed, this is the one time I put chili and beans together.  Leftover chili with leftover bean soup heated up togeher are great as a dip, or a meal, and of course the addition of diced onion, and/or shredded cheese, is great.  Yes, we did that.  Yes, we liked it.   With corn chips and without.  Liked it a lot.

Chicken from the stock-making project.  Well, you can't go wrong with boiled chicken from the stock-making.  Soup--some of the stock plus a couple of cups of chunked chicken, a can of Rotel,  some pasta or rice or other starch, some capers, some lime juice.   The leftovers of that can be "freshened" with 1/2 to 3/4 of a jar of commercial pasta sauce, and another batch of pasta, and some sliced (or whole) black olives.    Homemade pasta sauce is great, too.

Chicken from the stock-making project also produces chicken salad.  Husband and I like slightly different recipes (and why not) and Houseguest suggested using half sour cream and half mayonnaise for the "glue."  YES.  Great suggestion.  (My lazy way had been sometimes using Hidden Valley Ranch Dressing.)  I like my chicken salad to have crunch things in it: diced celery and diced green pepper.  I like the chicken to be in small lumps, not reduced to chicken-flavored mush, and just enough of the mayonnaise/sour cream to coat the other ingredients, not them floating in a sea of white stuff.  Sliced black olives in it brings it up a notch.  Husband likes diced raw onion in his and tried capers this time.  Both of us happy.