Back to Knitting, Briefly

The physical Wall I hit back in April affected everything I was trying to do, including knitting.   Last year I was often able to knit while sick, but by March I was making many more mistakes when trying to knit while sick--or even in the brief respites between things.  So the attempt to start a new pair of short socks toward the end of April quickly met defeat--for then.  Toward the end of May, I was finally able to get a heel turned on one of them, and it looked like this: 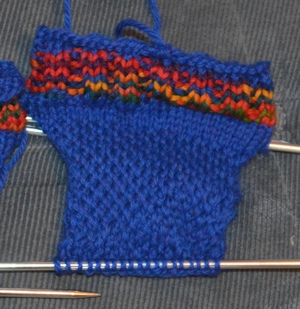 My notes indicate that I had turned the heels on both of them by then (in normal circumstances I've had finished this pair by mid-May and probably a second.  I wasn't well.)    However, when I picked up knitting again later, I could find only one of the started socks, and the one I had in hand had a problem on one side of the heel flap.  Then I had a lovely Houseguest for awhile at the latter end of June and first days of July, so by the time I gave up looking and decided to start another sock with the same yarn, it was well into July.   The original plan for the year would have produced two pairs of short socks in May, two pairs in June, and two pairs in July.  Didn't happen.

However, I started again, and yesterday (July 26) the pair ended up looking like this: 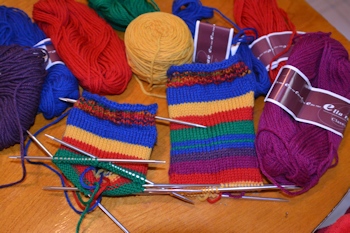 The sock on the left was started first, never lost.  The sock on the right, started recently, took lead.
The apparently "black" stripe is actually a true purple; the purple stripe is magenta-ish.
Today, thanks to various things, yesterday's leader stayed in the same place, while the lagging sock zoomed ahead.  Thanks to some errors of concentration, the intentionally 5 row stripes were sometimes six (or seven) row stripes, so the lagger not only zoomed ahead, but got out of phase with yesterday's leader.  This doesn't bother me at all, as the majority of my striped socks are not perfect matches. 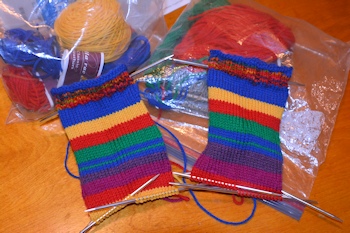 Left sock--stayed same length overnight; Right sock grew.
Once I realized I had miscounted a stripe (and was not going to rip out the whole row)  I started changing the design a little, and let the purple stripe (really too narrow in #1)  go to a full six rows in #2.   I am making fewer (but not no) mistakes knitting now--not back up to previous accuracy or speed (same with typing)  but good enough to go on with.   It's a delight to be able to knit again, even with mistakes.   And my feet will be happy with more socks in happy colors.  When they're done I'll get them out in daylight and hope for truer color.  These pictures were taken indoors in a combination of kitchen light and flash.
Tags: knitting, socks
Subscribe