So finally the socks I first named Circus Socks (intending them to be the colors used in Ringling Bros. circus ads) and now named Rainbow Socks, were finished today, except for weaving in the stripe ends, which can happen on the train. 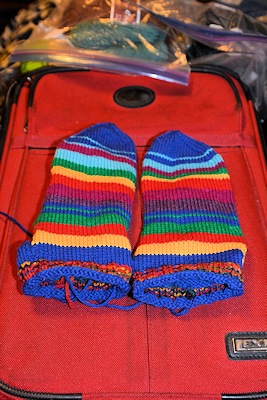 They're intentionally non-matching.  Awhile back I may have mentioned (did on Twitter) that I had one of these two (the left one, above)  but had lost the original second sock, and finally had to start over, knitting the right sock from scratch.   Well, today I found the missing other sock.

Here it is, laid out crosswise next to the pair.  Looks quite different: 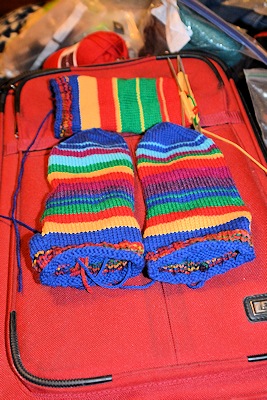 Now I need to knit a sock to not-exactly-match the sock that went walkabout so long, so it has a partner.  That top sock is ready for its toe, so it will sit there quietly while I do another top, heel flap, and foot part.  The toes, I'm afraid, will have to be a nonmatching blue (close, but not the same)--the blue that Ella rae Classic used to make before the blue that's used here.   I think (but am not sure) that I have just enough of the new blue to make the top and heel match, and can then use the old blue on both toes.  I may well run out of green, though.  (keeping in mind that most of these stripes are made with leftover yarn.   When I get back from WorldCon, I can photograph the Rainbow socks outdoors in good light.
Tags: knitting, socks
Subscribe