There were two frogs.  I thought I got pictures of both.  Evidently not. 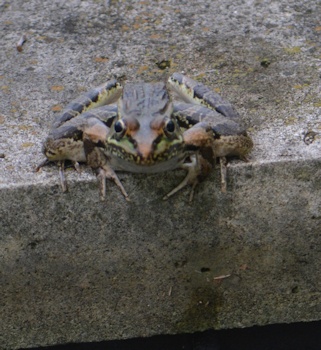 Rio Grande Leopard Frog today
These frogs reproduce in the back yard water garden.   They are sometimes joined by Cricket Frogs and/or Bullfrogs.  The Bullfrogs migrate down to the creek when there's water in the creek, and presumably some of the Leopard Frogs do too (because otherwise where did they come from?)  but the Leopard Frogs are here all the time.  We see their tadpoles in the water, all stages from small to starting to grow legs to just a bit of tail left. 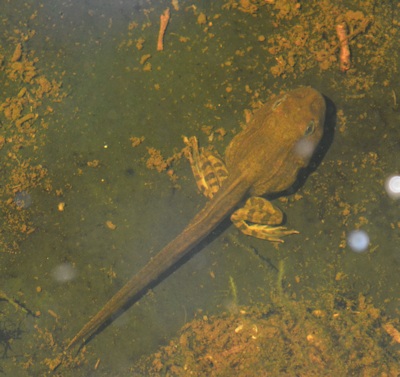 This image by K. Shull in late June.
Notice how blunt the tadpole's face looks compared to the "pointy nose" effect on the adult.  You can see the narrow "point" from above, even on the tadpole, but it's not as long or as pointed yet.

The water garden combines water and habitat for wildlife with an "aqueduct" over the lateral line of our septic system.   We designed it with a variety of water depths (from an inch to almost 4 feet, vegetation, and over 2000 gallons of capacity, circulated by an electric pump.  Water is now supplied from tanks that store rainwater capture. We have seem many species of birds bathing in the shallow sections (including a red-winged hawk),  and game-cams have captured raccoons, opossums, rabbits, gray fox, and white-tailed deer using the water source.  Frogs and toads both reproduce here, as well as many kinds of insect (several species of dragonfly and damselfly, aquatic insects like whirligig beetles, water striders, and giant water bugs.   Occasionally it's visited by a turtle, and we have documented two species of water snakes (the smaller, the Red Lined Ribbon Snake, is the one that keeps showing up.)
Tags: amphbians, frogs, wildlife
Subscribe