As I've said before (as you know Bob) I grew up in a hot, often humid climate.   I was a healthy kid, outdoors a lot, and though I certainly didn't enjoy the sticky hot nights before my mother put in a window AC, I could play hard outdoors in the summer without a problem.  Through high school, college, and even moving back to Texas after leaving the military, I was pretty much heat-proof.  Hiked, rode horses, lived once again in un-airconditioned houses, gardened, etc.  Even after we moved here, the first years we didn't use air conditioning and I went on--often uncomfortable, but not having real problems with the heat.

The first time I had a problem,  it was on a long afternoon walk on the land we'd bought the year before--a hot, humid day with little wind.  We came out of the creek woods into the fierce sun, and partway along the south fenceline I felt bad enough I had to lie down.  But I recovered fast and walked back to the house without a problem.  We had begun to use AC by that point, finding that we couldn't sleep on the hot, breathless nights without it.  Years later, I had another bout.  A few years after that, another.  Once per summer, perhaps, but not every summer.  I became more careful about hydration, about moving more slowly, resting here and there in the shade before moving on.

I resisted the notion that heat is harder for an older body to handle...not MY body.  Not the "grew up in the heat" body.  I wasn't having that.  Never mind that decades had slipped by, and that we now routinely used AC in the summer.   Never mind that due to earlier illnesses through the spring and part of the summer, this year, I was far out of condition anyway and no longer riding my bike 45-60 minutes a day most days.  But...denial will catch up with you, and today it did so again.   Hot, humid, breathless.   I needed (I thought) to walk up toward the highway to plant wildflower seeds in the squishy ground after several days of rain.

And--long story short--I walked myself into a solid case of heat exhaustion--soaking sweat, nausea, faintness, and all.  In hindsight, I could have known within a hundred yards that this was a bad day to go out in field clothes (jeans, long-sleeved shirt with the collar up, heavy socks and trail shoes, backpack, camera, binoculars, water (not a bad idea, but adding weight), etc.   I went on.  Walked down the near meadow to test the water depth and clarity at the secondary drainage (too deep to walk through in those shoes), back up the slope and around the near meadow to the west, then back east along a ditch, around clumps of trees, farther and farther, until blocked by more water running on the land and a trail that had grown up in head-high switchgrass (a favorite hot-day resting place for a rattlesnake.   Back to toward the first crossing...but still determined to plant the seeds decided to climb a low rise and get into some woods, go through, and come out the far side to plant them in another field.  I wasn't feeling great, but I'd come that far...  Blocked once more by a long pool of water deeper than my shoes were high.

At that point, I turned back toward home, but that put the sun in my face (even with the big hat) and I realized how rotten I was feeling.  Down the slope...and then came the classic nausea, spots before the eyes, realization that I had a problem and I had made it myself.  Luckily...cellphone.  Luckly...husband was in the house and his cellphone was on.   Before he was able to get the lawn tractor going, and down to where I was, I had to get down on the ground or pass out.  He helped me up, after a bit, and onto the tractor, after another rest, and I drove slowly back up (around the end of the near meadow, because straight across it would bog down in the low spots--our experience)  stopping in the shade of one tree to cool off a little.  Recovery has been complete (after a half hour or more in the kitchen in front of a fan on high) but the lesson was unpleasant.  Yes.  As you get older your temperature control doesn't hold as well, and if you add deconditioning to that...heat exhaustion will find you.

On the bright side (there are several bright sides) I got a great picture of a saddlebags dragonfly and some Scheele's setaria (a grass) and some switchgrass while I was out there.  The big bluestem picture was not as good. Luckily, many dragonflies will return to a favorite perch if you just stand still long enough. 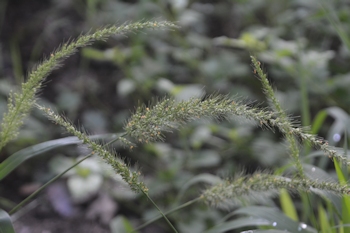 Scheele's Setaria flowering/seeding
This grass is uncommon to rare--a native grass, but picky in its demands.   Does not return every year in the same spot.   The inflorescence, as you can see, is particularly attractive.   I wish we had more of it, and this is the best picture I've  gotten so far.  Worth a bit of sweat and misery just for these two pictures...if I'd stopped after the dragonfly shot, I might have made it home without help!
Tags: grass, mistakes, odonates, wildlife
Subscribe