Today I noticed an unfamilar small butterfly--quite a few of them in fact--flying low above the grass and occasionally perching with wings folded (more rarely, with wings open briefly.)  From a distance (and with my eyesight!) they appeared to be cream and orange.  When photographed (and the photographs put into the computer)  the dorsal side of the forewings was basically white with some gray markings and a little bit of orange (three "dots) on the trailng edge; the hind wings were mostly orange with white spots and dark gray edging. 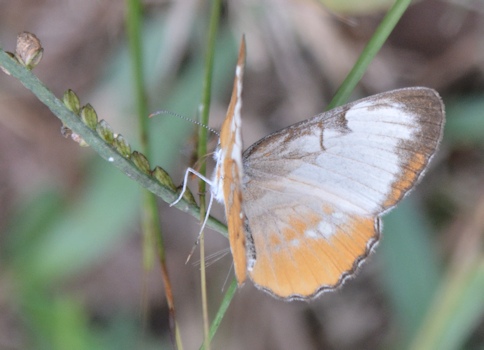 Note longer white hairs protruding below the abdomen in this individual.
I saw what looked like courting behavior in some of these, but was unable to photograph it .
IDed by cdozo as Common Mestra (Mestra amymone)
On the ventral side, both wings were largely orange (a sort of caramel color) with a band of white and some smaller white spots on the forewing and a band of gray border thinly with black, and a row of uneven white spots and smaller white spots on the hind wing: We did have it on the species list, but hadn't seen it for years.  Now it's abundant.