I know it's been over a month since my last post on January 20.  That's because of too  much stuff and too little time.  The highlights: on January 19, I found out I would have to find a new host for my four websites (each with an embedded WordPress blog) and get them moved, by March 31.   I also had (have) a book to finish, one I was supposed to turn in by February 1.   We also have a new Administration in D.C., one with which I am not in sympathy (to put it at the most...gentle...)   And I acquired another health scare, on top of the ones already slowing down my work output even without the other.  All this coalesced in the last weeks of January.


At present the websites themselves are in their new home.  The WordPress blogs are misbehaving and not working with the new host's software for some reason no one has yet figured out.  Time marches on.   I also have had to notify those who use my SFFnet email that it's going to go *poof* and some of those people have not responded to let me know how to change the email on the various listservs to one of my other email addresses.   In January I'd started making all our bread again, as a health measure and that's working, but it's also taking up time, as it does.  I'm an experienced bread baker, but making bread from scratch, by hand, necessarily takes time in the prep, the actual making, the baking, and the cleanup.  Unavoidable (good bread, though.) 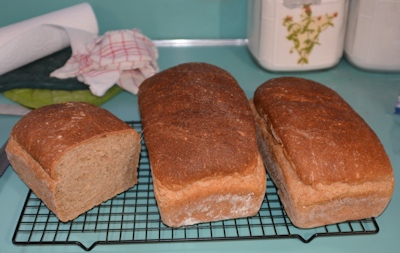 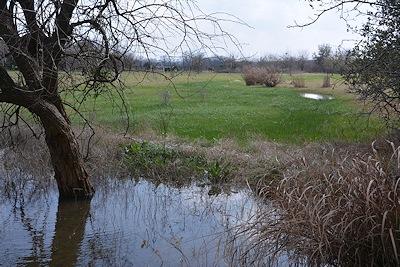 Intense green defines the natural drainage E to W in Near Meadow.
This picture, taken from behind the #3 gabion on February 27, 2017, a week after heavy rain, shows the lush green of the drainage from the gabion pool toward the south fenceline;  it forms a sinuous curve and at this point was still flowing very clear water across the main trail across the near meadow.   Becaise gabion (and the check dams up slope from it) slows down runoff, drainage now is gentler, wider, and clears more quickly even after heavy rain.  What was once bare ground with seasonal weeds now supports sedges, native grasses, forbs, and even a few trees.  Wildlife use is continuous when there's been enough rain to form pools: amphibians (leopard and cricket frogs),  crayfish, aquatic insects, dragonflies and damselflies.  Birds and mammals water here as well.
Tags: breadmaking, country life, writing life
Subscribe