I was afraid that we had lost our crayfish in the 5 year drought--they disappeared and did not return for well over a year when the drought ended.  But this year...this year we've got 'em.   Here are a few pictures of the crayfish and where they've shown up since late December.  I haven't even made it down to the far end of the place to photograph them there (responsibilities keeping me closer to home.) 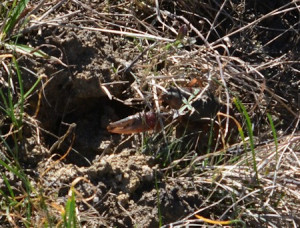 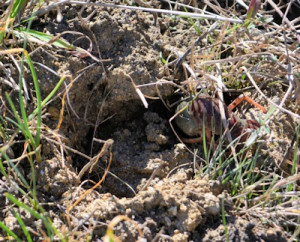 This crayfish (you can see its head sort of orange against the dark hole) is the same as in the
next image (orange jointed leg showing.)   It was working on a burrow that connected to the pool
behind the #3 gabion. 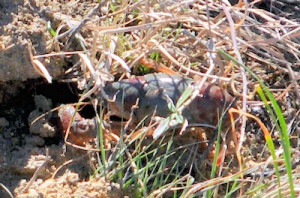 Another image, same crayfish. Dark greenish carapace,
orange-red legs, one red claw easily visible.
Up by the street (higher ground) two trenches were left years ago by someone with a backhoe.  Over the years they've filled in partly, and fill with rain if there's enough.  One has crayfish in it; the other doesn't.  The bottom of the one that doesn't is covered with a layer of bur oak leaves. 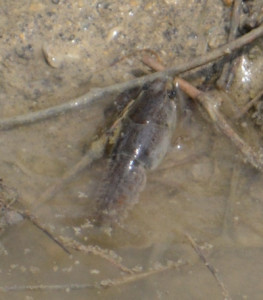 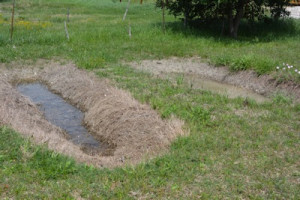 Crayfish from one of the trenches, the one to the right with muddy water. Lots of crayfish
stirring the water. 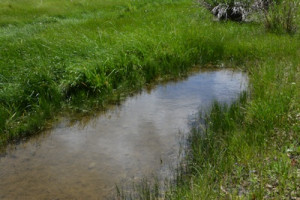 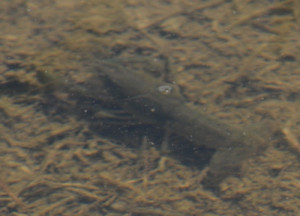 Clear shallow pool in meadow, has several crayfish (from very small to ~4 inches in it.
Appear to be grayish, not green & red. 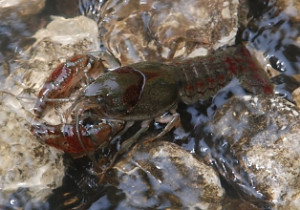 Large crayfish working its way upstream over rocks in stream crossing.
When we bought this place, the only crayfishe were in the main creek and "overflow" channel near it.  Water management practices have increased the number of places water stands or moves slowly in amounts large enough to attract crayfish, and in soil deep enough they can burrow and protect themselves in dry periods.  We are very glad to have them, as they are one biological measure of water quality.  If you have a lot of them in a shrinking area of water (a static pool after rain) they make the water murky with their digging and moving around.